It-Inspired Photos of a Toddler Will Haunt Your Dreams

Just in time for the Stephen King remake to hit theaters, a Mississippi teen transformed his little bro into Pennywise for a frightening photo shoot. 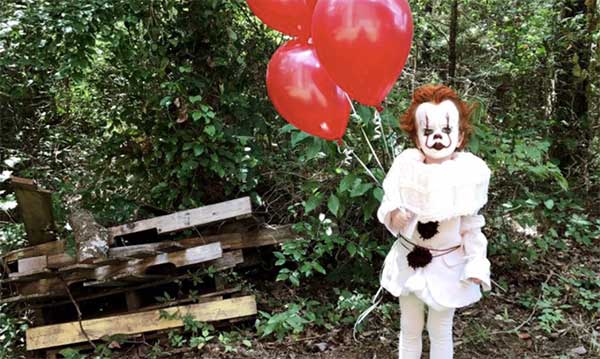 Full disclosure: I have never seen the movie It and I have no intention of watching the 2017 remake, either. I’m not a fan of horror movies (I’ll stick to comedies and love stories), and to me, there’s something extra terrifying about a killer clown. It gives clowns a bad name – sort of like the creepy clown for hire that we wrote about a couple years ago.

So when I saw photos of a toddler transformed into It‘s killer clown, Pennywise, I jumped.

Yes. I jumped. Don’t laugh – I can’t even watch the previews for the new movie without jumping. Hell, who am I kidding – I look away when the preview plays on my TV screen. It’s that bad for me.

Anyway, back to this creepy toddler.

A Mississippi teen named Eagan Tilghman took the photos of his 3-year-old brother Louie, and they’ve gained momentum – just in time for the movie remake to hit theaters.

The teen told Mashable that he’s been dressing his siblings in costumes for photo shoots since last year.

“Some of his most clever works include Doctor Strange, Guardians of the Galaxy, The Joker from Batman and even Edward Scissorhands,” Inquisitr adds.

When his other brother, 4-year-old Hosea, wanted Eagan to paint his face like the Joker, the teen was inspired to transform Louie into Pennywise. “I did and we just had the idea to dress Louie up and take a few pictures,” he told Mashable.

The results are terrifying, although Eagan’s mom, Brooke, took to Facebook urging people to see the “creativity” over the “creepiness” in these photos, Inquisitr reported.

I see both. The photos are amazing, even if they hardcore creep me out.

Louie knows how to play to the camera. Perhaps he has a future in show biz? And his brother, aka the photographer, is clearly talented – so it’s no wonder the photos have gone viral.

Mom also said the photos are 100 percent authentic except for Louie’s forehead, which Eagan had to PhotoShop to appear so large.

What do you think of the pics? Tell us in comments.