No, it wasn't intentional. Yes, the video went viral. And the kicker: Vegas sprung for a redo, which he filmed in two-way, and it's just as entertaining. 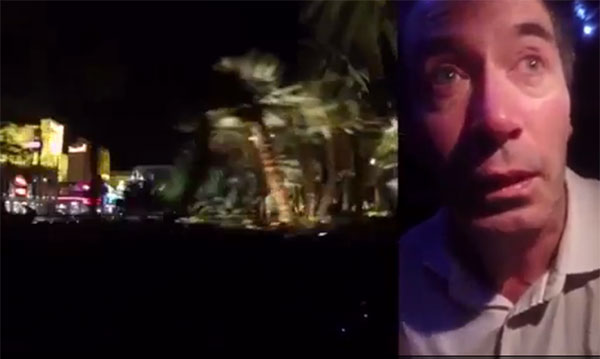 What happens in Vegas definitely doesn’t always stay there. Especially when it involves a charmingly clueless Irish father who’s shot his trip in selfie mode.

That’s precisely the viral-video fate that befell Joseph Griffin. His grown son, Evan, lent pop his GoPro cam and a selfie stick to film the Las Vegas vacation – which, Evan told Irish men’s lifestyle site Joe.ie, was for his mom’s birthday. “I did not, however, instruct him on how to use it,” Evan adds on the official YouTube montage, which he back on loaded Nov. 13. Suffice to say, hilarity – and 8 million-plus views – quickly ensued.

Along his epic filmed-in-reverse misadventures, our technology-challenged hero chats up the views we can’t see (since he’s naturally center stage). There’s the opening footage, where a shirtless Joe, in his hotel room, takes in the “stunning” mountains and majestic Trump Tower (“same color as his hair,” he quips). Next up, on The Strip, he shuffles about, gaping at the lights and sights, in a sped-up sequence set to The Benny Hill Show theme song (nice touch, son).

Perhaps best of all, though, are some straight-up quality dad moments. Like when he backs into a revolving door. Or quips, “I’m the tourist that everybody hates” while strolling with his selfie stick. And his dopey Forest Gump impersonation at 2:39 had me just about falling out of my chair (reprised Vegas-style at 2:55).

Here’s the little 4:17-minute jewel in its entirety, dubbed, “An Irishman in Vegas”:

Alas, we don’t get to experience the full extent of his trip. As Evan explains to Joe.ie, “All the footage is only from the first day, ’cause my dad later took (the GoPro) swimming without the waterproof case and fried it – so (he) missed out on the Grand Canyon and everything.” D’oh.

While our lives are richer for Griffin’s gaffe, there’s a silver lining for the family. After all, vacation footage is precious, particularly for a trek overseas. You might never get a second chance to capture it. And especially all due to a harmless mistake that turned into a laugh-fest (though, admittedly, Griffin seems pretty good-natured about the whole thing). But here’s where Joe’s luck turns

Apparently the Las Vegas Convention & Visitors Authority caught wind of the oops, and gave father and son the VIP treatment in a “redo” vacation, complete with a proper showgirl welcome, awesome chow, a rad room and more. Oh, and he was equipped with a foolproof two-way GoPro to properly capture his second trip right (and with some The Godfather and Scarface impersonations added to the mix):

But we’ll always have Paris – that is, Griffin gawking up inside the Paris Las Vegas Hotel. And one of my personal favorite observations from the original: “Ah! There’s people in the pool.” (Translation: Dad’s peering out the monorail window.)