Queen Bey announced the 1-month birthday of her twins with a professional Instagram pic that one fellow mom of multiples recreated with hilarious results. 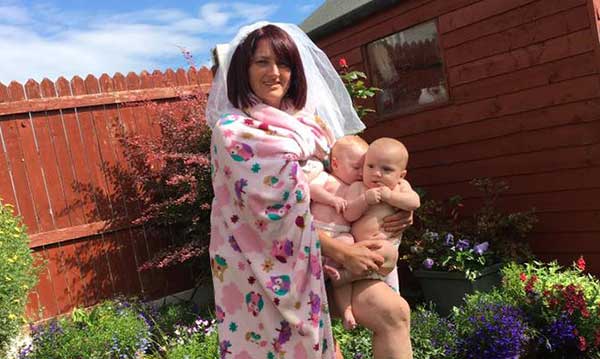 If you’re a member of the Beyhive, you’ve probably been waiting with baited breath for Beyonce’s announcement of her twins. Lucky for you, that came in the form of professionally done Instagram post at 1 a.m. on the 1-month anniversary of their birth.

But if you’re a mom, especially a mom of multiples, you’ll probably get a kick out of Sharon Kellaway’s spoof of Beyonce’s baby announcement more.

This mom of five, including a set of twins, from Cork, Ireland saw the “Formation” singer’s announcement and thought that it was too over-the-top, so she decided to make one that fit the “mother of twins” bill a bit better.

In Beyonce’s baby announcement, Queen Bey stands in front of neatly manicured bushes and a massive flower display near the ocean while adorned in a catwalk-worthy purple flowered open-front gown that whimsically drapes around her – complete with a floor-length blue veil – as she clutches her babies to her chest and stares angelically into the camera.

To mimic, Kellaway threw a pink owl-print fleece blanket over her shoulders like a cape, plus a white veil and a pair of Converse. She balances her own diaper-clad 5-month-old twins awkwardly on her knee in her backyard garden and smiles with squinty eyes as her 6-year-old snaps a few shots.

She then posted her pictures to Facebook with the caption, “More from the photo shoot … I wonder how many photos Beyonce had to get through to get the right one. My 6-year-old took the photos … no qualifications and still did a mighty job.”

Her friends got a laugh out of it and asked Kellaway to make the post public so that they could share it. Then, it went viral.

“I just wanted to take the mickey as she looked so unrealistic,” Kellaway told Independet.ie. “She will never know what it’s like to have twins all day every day. The image was just so unrealistic and PhotoShopped. It’s a far cry from the lovely reality of a real bond with twins.”

Facebook users had mixed reactions to the pics, with some declaring that Kellaway’s were better and other claiming Bey’s were. Some called Kellaway names for “making fun of” Beyonce and others simply dropped a line to tell her that her babies were cute.

But whether your part of Kellaway’s clan or team Bey, Kellaway has a point. Beyonce’s picture is so not an accurate representation of parenting.

But to be fair, Bey likes her privacy, so we really don’t know that she wasn’t sleeping between shots or if she has met the wrong end of her newborn son while changing a nappy.

Parenting is tough, and there isn’t a right way to do it. Beyonce has got a set of pipes on her so she has the option of taking a load off for a while, if she chooses – but that doesn’t mean that she’s any less of a mom. (After all, when she sneezes, she probably still pees a little, just like any other mom, and there’s no doubt that she loves her kids).

Kellaway, on the other hand, has five kids and is a normal, everyday lady who has to lug kids to the grocery store with questionable stains on her sweatpants. But she loves her kids, too, and her struggle doesn’t make her any better.

I guess the point is, as long as both love their children and neither raises little bullies that grow up into bigger assholes, they’ve won the parenting game – regardless of the plays they use to get there.

What do you think of Kellaway’s and Beyonce’s pictures? And do you feel that either is a good representation of parenting? Let us know in the comments below.

Want to find a restaurant the whole family will enjoy? Here is a list of places to try out.
Read more
Advice