Is it OK to Change Baby’s Diaper in Public?

When you're out and about and a changing table isn't available, what's a parent to do? 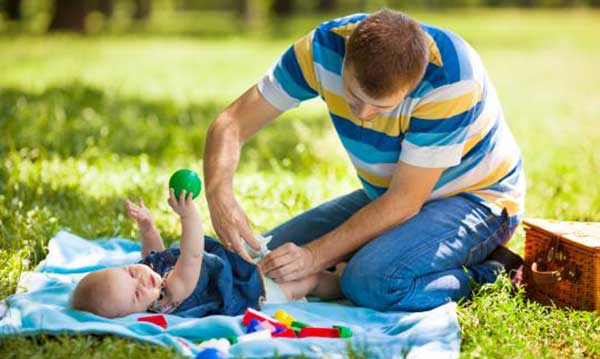 Diaper changes are sometimes needed at the most inconvenient times in public – like on an airplane when there’s a long line for the bathroom or when you’re alone in a restaurant with three kids, no changing station and the food just arrived – and parents have to scramble for a decent place to change baby.

A recent article on Yahoo Parenting asks the question: Should you change your baby’s diaper in public? They mention how parents have been asked to leave restaurants and even questioned by police for diapering their baby in public and it made me wonder: is it really such a big deal?

The writer quotes Connecticut mom-of-three and obstetrician Shieva Ghofrany with some tips on when it’s OK and when it’s not.

“If you’re changing a diaper on an airplane seat, place something under the baby so the next person doesn’t get a dirty seat, be discreet, and put the soiled diaper right into a bag,” she says.

Changing a diaper on a restaurant booth, on the other hand, she calls “completely gross” and suggests changing baby on the bathroom floor.

“If you don’t have a changing pad, you can put paper towels on the floor,” Ghofrany tells Yahoo. “As gross as it is, I feel I shouldn’t make the rest of the restaurant suffer by changing my baby in the booth.”

I was at a restaurant with a friend and her baby a couple months ago when this issue came up. She wanted to check whether his diaper was wet and asked if I thought anyone would mind. While my first thought (as a parent with kids who aren’t in diapers anymore) was that she should just head to the restroom, the area we were seated in was pretty empty – we actually wondered if we got seated there because we had a baby with us – and she was going to lay him in his stroller and not on the table or booth.

She ended up using the bathroom because she was afraid what the waitstaff might think if they noticed, and it reminded me that parents are often prevented from using common sense because they know they’re being judged for their actions.

No one would have noticed this particular diaper change, there was no smell to worry about and her infant probably would have been exposed to fewer germs by staying in his own stroller than being laid on a public changing table.

Sure, there are probably parents who have laid their baby right on a restaurant table to change a poopy diaper and most people would agree that’s pretty gross (though perhaps unavoidable if they walked there so the car wasn’t an option, no changing table was available or the bathroom was a single stall and occupied. What then?).

On the Yahoo story, though, some commenters criticized any public diaper changes and that’s just unreasonable. Except in most cases where people are eating nearby, parents should feel free to discreetly (for baby’s privacy) change their baby wherever they need to, especially since diaper changing stations are missing from some places and even less common in men’s rooms and postponing a diaper change can lead to a rash or other problems.

Whether it’s diapering in public, nursing in public or taking baby on an airplane, into church, or to a nice restaurant or hotel, moms and dads are often prevented from going about their business because they feel the weight of judgment on their shoulders. Meeting your baby’s needs shouldn’t be dependent on who else is around and babies have the right to be places, too. Parents should use common sense and focus first on meeting their baby’s needs and not on what other people think of it.

What do you think? Have you ever needed to change your baby’s diaper in public? Tell us in the comments below!