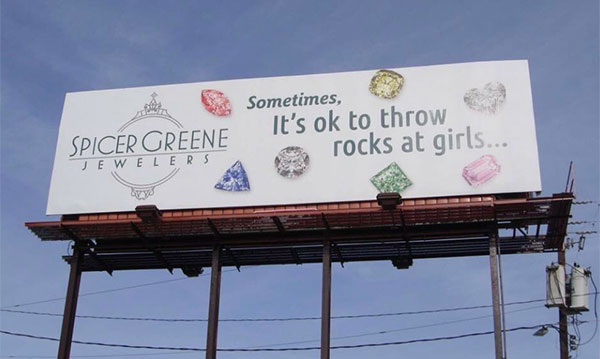 The marketing team for Spicer Green Jewelers in Asheville, North Carolina wants to sell customers some jewelry with a side of sexism.

Near Interstate 240, a billboard advertisement for the jeweler went up in March. It’s covered in colorful gemstones and reads: “Sometimes, it’s OK to throw rocks at girls…”

People didn’t like the sign, which many thought was a cutesy play on violence. Letting this this kind of advertisement slide isn’t funny for women who have been victims of violence.

Twitter user KJ, or @Pipsquak88, says: “normalizing violence against women is not OK. ‘Oh he beat you up, because he likes you sweetie,’ is NOT OK.”

“It’s not offensive to you only if it doesn’t affect you. Try some empathy towards women who HAVE been a victim to violence, who actually find it offensive or triggering. I know, I know. Empathy is quite hard to come by these days,” Facebook user Stacey Polston says. “It may be clever to some, but to others, the underlying joke is absolutely NO joke at all, and is very, very real.”

Even, Chelsea Clinton responded on Twitter by saying, “Talking about hitting girls is never funny. Ever.”

The lambasting has transcended social media, and a public protest has been organized in response to the billboard.

Ellen Perry, a literature and humanities teacher at the University of North Carolina at Asheville and Asheville-Buncombe Technical Community College told her local news station ABC 13-WLOS she has organized a protest outside of the jewelry store on Sunday, April 1 at 2 p.m.

Perry promised protests would continue until the billboard is removed.

While many were outraged by the ad, some people thought the ad’s criticisms were baseless, dramatic and viewed the billboard as harmless.

“What a sickening bunch of snowflakes,” Rick Romatowski wrote on Facebook. “America is producing a bunch of freaks who cannot even figure out what bathroom to go to.”

Some users said Spicer Greene did nothing wrong, and they should keep the billboard up, because taking it down would just be giving into nonsense.

“No reason to apologize,” Facebook user Jennie Davis Davis said, “It was clever and funny with literally no meaning of violence. Common sense has been on the decline, apparently now a sense of humor is in jeopardy as well.”

Nevertheless, Spice Greene Jewelers has since responded with this apology on its Facebook page:

“To whom we have offended with our recent billboard, please accept our apologies. We do not condone violence of any kind toward any being. We are humble enough to realize when we make a mistake and humble enough to realize the context in which we are speaking. We did not intend to cause controversy and our billboard communicated something we did not intend. We intended the billboard as a play on words to encourage the loving act of gift giving and are deeply saddened that it offended anyone.”

Eva-Michelle Spicer, who owns the jewelry store with her husband Elliott, is a member of Western North Carolina women’s advocacy group Women for Women and fundraiser for Our Voice, a movement against domestic violence.

She told WLOS the billboard was intended to refer to the old childhood teaching about not throwing rocks at girls – and the response they received was unexpected.

However, her husband Elliott says he’s had a few conversations since the billboard went up that have changed his mind about it.

“I didn’t realize it was a problem until recently. In hindsight, it’s definitely changed my perspective.”

What do you think of the billboard? Tell us in comments.