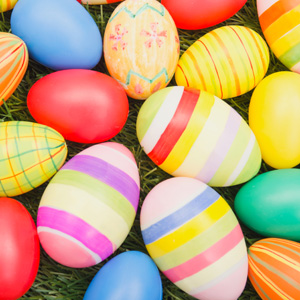 It’s a tradition here in southeast Michigan for the Easter Bunny to fly his helicopter over parks for marshmallow drops. But in one Colorado city, it seems helicopter parents have wrecked a perfectly nice little neighborhood Easter tradition.

A case of a few rotten eggs spoiling the bunch?

The bad behavior actually happened at last year’s event in the Old Colorado City district. Apparently, there was no place to hide the bright plastic eggs in tiny Bancroft Park, according to an Associated Press report – so thousands of eggs speckled the lawn “in plain view.” To boot, there was a reported bullhorn malfunction – people misheard the emcee and flew off to the races too soon.

But the bigger issue was the pushy parents who reportedly jumped into the fray, scooping up the booty and ending the event in seconds.

“It sort of got out of hand,” Dave Van Ness, the district’s executive director, told local Fox21 News. “There were disgruntled people, because there either weren’t enough eggs to go around – or some kids didn’t get one. Parents would get aggressive. Rather than create ill will, let’s just not do it.”

So that’s precisely what went down. No candy- or coupon-filled eggs. No Kodak moments. Sorry, kids: The Easter Bunny’s skipping this round. (And, quite possibly, the foreseeable future.)

Some have pointed a finger at the “millennial children generation” – in which parents, the argument goes, are way too involved in their kids’ lives.

That’s the opinion of Ron Alsop, a journalist who wrote The Trophy Kids Grow Up. And he told the Associated Press as much: “They don’t give their children enough chances to learn from hard knocks, mistakes.”

But, perhaps, is it just survival of the fittest? That’s what one parent in the story – nearby resident and dad Lenny Watkins – seemed to think.

“You have all these eggs just lying around, and parents helping out,” he told the AP. “You better believe I’m going to help my kid get one of those eggs. I promised my kid an Easter egg hunt, and I’d want to give him an even edge.”

Surf through article comments, though, and you’ll hear plenty of battlefield tales from other parents. Massive egg-swiping swarms of grownups. Older kids knocking down little ones. Shoving and hording. Forget “wanting to give your kids the best.” It seems, in some cases, the modern egg hunt has turned into Darwinian warfare. As one wry writer observed, “I swear, I thought I was reading an Onion headline.”

Could the event be revived if, as some have suggested, certain safeguards were put in place – per-child egg limits, pre-registration and the like? Sure, maybe. But that doesn’t erase the me-first mentality some basket-gripping parents have already instilled in the wobbly toddlers trailing behind them.

As one nameless local guy put it to Fox21: “What kind of role model are you as a parent if your actions are canceling an event your child’s going to remember for the rest of their life?”

And, really, isn’t it a bit sad when a fun children’s event has to be regulated because their parents can’t follow the rules? Geez, Louise.