Kids Who Get Stuck in Prize Claw Machines (and Filmed) 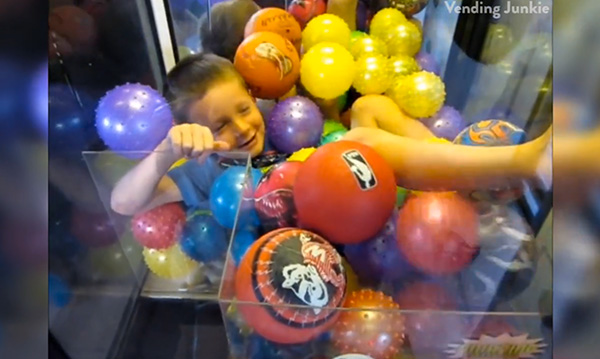 I think every parent has wasted tons of change at the prize-filled “claw machine” – only to walk away with no stuffed animal and a disappointed kid. Well, some children have decided to take matters into their own hands by climbing right on in, causing their parents to panic while they attempt to “claw” themselves out.

And apparently, many also bust out their smartphones to film the resulting conundrum, as a recent Slate video montage called “50 Cents to Play” proves. The footage is filled with scenes of small kids crawling into claw machines and taking what they feel is theirs. Some sift through the stuffed animals and manage to crawl back out, running off with their golden toy – while others sit, crying, trapped inside the machine in need of employee or fire-department intervention.

I bet you’re wondering just what goes down in these situations. Were the parents paying attention or caught off guard? I mean, things happen – and sometimes those kids just move too fast, right?

That was the story behind one such video, posted to YouTube back in 2013. According to a Huffington Post article, mother Lindsey Stewart was bowling at a local alley and claimed that “both kids were completely in view.” She added that her brother was watching her little boy when it was her turn to bowl – and, within 35 seconds, the tyke quickly made his move into the claw machine. Luckily, an alley employee had a key and was able to free the kid without causing a scene. Making light of the situation, Stewart simply stated that for her son Stewart, “every day is an adventure.”

Granted, it can be humorous. Like in the October 2014 case of 18-month-old Colin Lambert of Tennessee. ABC News reports that rug rat quickly climbed into a claw machine at a local coin laundry while his grandmother, Diane O’Neill, was checking a message on her phone. O’Neill admits, “I took a bunch of photos. As long as he was OK, it was funny.” But by the time the fire department came to rescue, Colin wasn’t smiling anymore.

In most cases, it seems, kids luckily wind up unscathed (and walking away with a toy, to boot). And the Slate video definitely shows that. But still, it can be a scary experience for parents and curious tots alike – as it was back in 2012 with Kaytlyn Campbell, 2, of Kentucky who, ABC reports, was in pretty good spirits after crawling into a different Laundromat machine – until the firefighters’ saw revved up.

So what is it that attracts kids to these machines? Is it the light shining on the visible toys that seem so close within reach? Is it the thought of easily winning a prize only to watch the toy slip from the grasp of the claw? I even find myself getting hypnotized by these magic machines. Before I know it, I’ve emptied all pocket change and me and my toddler walk away empty handed. Hopefully she never gets the bright idea to claim her prize.

Photo is a screenshot from a Vending Junkie video.