These two little ones in Washington lifted their mom's SUV because they wanted to spend some time with grandma. 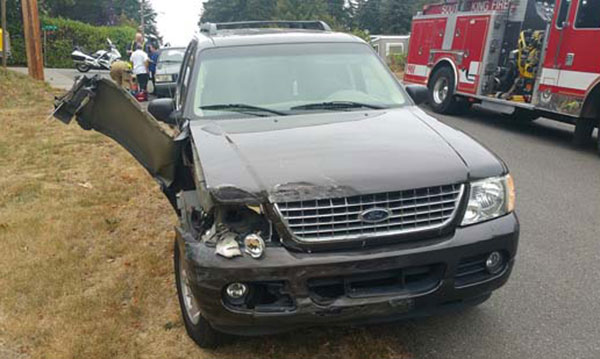 Grandma’s house is a magical place. Getting a chance to visit grandma always felt like a special treat.

Which is why I completely understand why two youngsters in Federal Way, Washington had the urge to snag their moms’ SUV to go to their grandma’s house for a little visit.

According to a news report from 6abc.com and a Facebook post from Federal Way Police Department, a 5-year-old and 3-year-old took the keys to their family’s car, hopped in, somehow started the car and made it out into a nearby intersection, where they T-boned another car.

You can see photos of the damage here:

Luckily, the kids weren’t injured, and the other driver suffered just minor injuries like scrapes and bruises, 6abc.com notes.

Apparently, a neighbor heard the crash and ran outside. She told KOMO News that she asked the kids, “Where’s your mom?” to which the kids replied, “Sleeping. I want to go to my grandma’s house.”

You can’t blame these kids because after all, they probably thought taking the car to visit grandma was a logical thing to do. But my initial thoughts were: why was mom sleeping while two mobile kids were up unsupervised? Nobody was around to prevent them from getting the keys and getting into the car, starting it and driving it away?

Commenters on the Federal Way Police Department’s page had mixed opinions to share, too, with some noting they’re just thankful the kids were safe – and some even remembering times they managed to take their parents’ cars as kids.

Chris Johnson, a Facebook commenter, says, “I too did this as a kid when I was 2. Put the truck in neutral and somehow disengaged the parking brake. The truck rolled out of the driveway and down the street!”

Another, DeeDee Love, adds, “Grandma’s house has plenty of cookies and love! Glad the kids are not harmed.”

One commenter, Emory Griffis, points out, “Glad the kids are all right; but I drive this same SUV and it is beyond me how they managed to coordinate the details at under 3 feet tall.”

And while some comments say maybe the parents need to keep a better eye on their kids or suggest hiding the keys, others are a little more critical of the parents.

“Are the parents being charged for neglect?” Eric Brasidio asks.

Another, Ilona Herbert, chimes in with, “It’s interesting that so many people think that what happened is just so darn cute. ‘Ha-ha! Kids do the craziest things!’ If I was the one driving the car that was hit, I would be sure to inform the parents that I will be expecting them to pay for the damages their precious kids did to my car.”

This is such a scary situation, and I guess we just have to be happy the incident didn’t end on a much worse note. It’s hard to be too critical because I’m sure their mom feels just as relieved they’re OK. Plus, maybe mom was so tired from the day she passed out on accident. Or the kids got a hold of the keys without anybody realizing they would know how to actually start the car. We really don’t know all of the details, after all.

Perhaps what commenter Stacie Eder McLean says on the police department’s post is something many parents of toddlers can relate to: “I am not in a hurry to blame the parents at this point. Kids that age can be slippery.”

What are your thoughts on this story? Comment below and let us know.