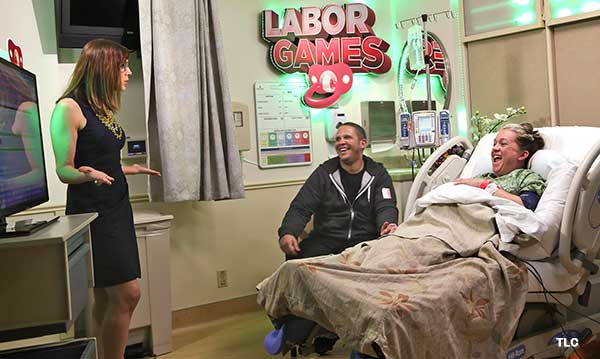 Trivia and childbirth collide in TLC’s latest show, Labor Games, which made its debut with two sneak peek episodes this week.

The premise of the show is this: Women who are in labor, along with their spouses, compete for prizes for their soon-to-be-born baby. They can win trips, cash, baby monitors, clothing, food and even a $10,000 scholarship right before their bundle of joy’s grand arrival. TLC has ordered 12 half-hour episodes, which have been filmed at Pomona Valley Hospital Medical Center in Pomona, California.

Interesting concept, right? I actually think this is insane, to be honest. Who wants to be put on national television while they are in labor? Would you have wanted cameras in your face during that time?

I caught a couple of clips from the sneak peek and the host, Lisa Arch, knocked on a couple’s hospital-room door and asked them if they want to play the Labor Games. It was 1:40 a.m., by the way. And the host acted as if she had just heard about the couple and decided to surprise them with an offer to play on this game show. Really? Am I supposed to believe the show isn’t staged? Because I don’t – not for one second.

During the show, couples have to answer questions like, “Which of the following is not a teething remedy recommended by Parenting.com?” One of the dads had to taste test some baby food and identify what flavors they were. During the show, moms-to-be will have contractions, but somehow the show still goes on.

Am I the only one who thinks this latest round of “reality” TV is too much? Would you be a part of a game show like this – or do you think it’s nuts, too? Leave us a comment below!