Ladies, Do NOT Put Vicks VapoRub in Your Vaginas

While blog posts and forums might say otherwise, it's not a good idea to use this vaporizing ointment to eliminate odor or enhance your sexual pleasure. 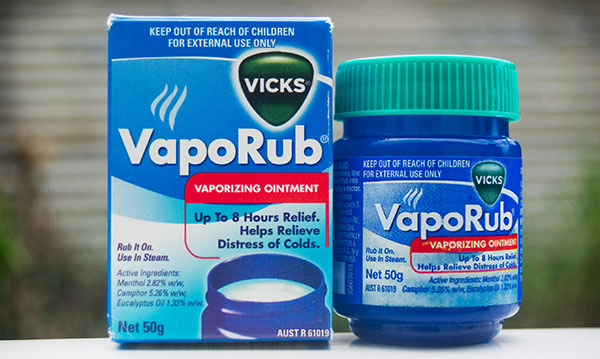 Bedazzling, waxing, steaming, cleansing washes and wipes, sprays and even surgery. When it comes to our vaginas, there’s apparently a lot we can do to perfect the look and aroma of it.

At least that’s what we’re told. But is there really anything wrong with our vaginas in the first place? If you ask some women, yes. In fact, they’ll tell you their bits just don’t smell right.

So, in the most recent attempt to combat vaginal odor, some women are reportedly using Vicks VapoRub on and in their vaginas.

No, we’re not making this up. But we’re here to tell you this: Don’t do it – no matter what those blog posts and forums tell you.

We learned of this new “remedy” from folks over at Allure. While they also urge women not to use Vicks this way, they note, “Commenters allege that it cleans the nether regions, gets rid of vaginal odor and calms itchy skin.”

The truth is your vagina doesn’t need any of your help in this department. It’s self-cleaning and if there’s a major odor issue, you should probably call your OB-GYN instead of shoving an ointment used for colds inside of you.

Blogger Dr. Jen Gunter urges against its use, too. She goes on to say that some of the ingredients in Vicks – including camphor, turpentine oil and menthol – can be counterirritants. “For example, the cooling sensation of menthol on the skin can reduce itch,” she says. “Counterirritants often produce unpleasant sensations. Basically, you are replacing one unpleasant sensation with another one that is less unpleasant.”

So that might work fine for itchiness or soothing swollen sinuses. Slathering it around down south, on the other hand?

I’ll let the doc explain: “It is not uncommon to see vaginal reactions to counterirritants placed on the vulva as the mucosa (inside the vagina) is more sensitive to irritants.”

And not the type of “reactions” you’re likely going for.

Which leads me to part two the Vicks VapoRub phenomenon. Aside from being a supposed solution for smelliness, some women boast that it’s beneficial during sex. If applied to the clitoris, they claim, it provides a tingling sensation.

For crying out loud, people. You want a tingling sensation? Here are a few things you can safely use on your clitoris for stimulation:

What was your reaction to this Vicks VapoRub news? Tell us in comments.

If you want to join the fight to help end gun violence, start with these organizations.
Read more
You