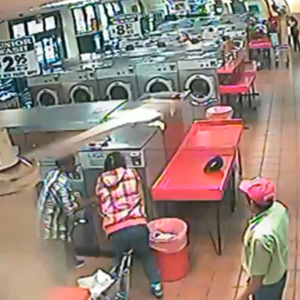 Was it carelessness or poor decision-making that led a father from Cadmen, N.J. to place his toddler into a Laundromat washing machine and close the door?

Because once he did, the machine started running.

The L.A. Times reported that the frantic attempts by the little boy's guardians to force open the door failed – as the doors automatically lock once they've been fed coins, and the machine kicks into gear.

The silver washer was filling up with soap and water with the young child inside of it for well over a minute, according to reports. The panicked couple ultimately scrambled to get help – and a Laundromat employee rushed over and cut the power to the machine, the local CBS in Philadelphia reported.

Luckily, the child came out with only a few bruises, according to witnesses, and was reportedly hurried to a hospital afterward. Which leaves many wondering: Is this incident a momentary lapse in judgment for the father – or an example of overall bad parenting?

Because, unfortunately for him, the mishap was caught on the security cameras – you can see what appears to be the tyke's diaper as he's jostled around inside the machine. The Laundromat owner reportedly uploaded the video to YouTube, and it's since gone viral, with readers sounding off all over the Internet.

"These parents are complete … let me repeat … COMPLETE idiots," Lyrica commented on a MSNBC Today article. "If that employee hadn't been so quick thinking, they could have easily lost their child because of their stupid mistake."

According to an updated report on the MSNBC Today article, the child's mother says she is not the woman in the surveillance tapes, and that the father's girlfriend was with the child at the time of the incident. She also claims that the man in the footage is not even the child's father.

Regardless of who's who, many angry readers have piped up that this guy certainly wasn't thinking ahead with this playful joke gone awry, questioning what sort of parent (or caregiver) would do this to his or her own child.

"Why the hell did that stupid man put that child in the washing machine?" Ofelia commented on a myfoxdfw.com article. "You should always consider the 'if ' situation. Something could always go wrong, but you're not supposed to play into it. And what kind of woman lets her baby be put into a dangerous machine?" (The female companion was sorting clothes nearby, glancing over occasionally, and didn't object to the man's actions.)

Others believe that this was merely a playful moment gone wrong.

"Everyone is becoming way too critical and judgmental," Security30 commented on nj.com. "They were simply playing."

JenAllen also commented on the MSNBC Today article.T70sct2avYE that although this was poor judgment, part, it doesn't necessarily indicate bad parenting.

"Dad made a BIG mistake, but these parents are obviously loving and playful, and were extremely distressed when they realized their child was in danger," JenAllen argued, "which is a lot more than I can say for many parents."

Judgment aside, it doesn't look like these folks are going to face charges, according to the most recent reports we've trolled. But either way – it's probably best to think twice before placing your child inside of powerful piece of machinery.