Little Girl Doesn’t Care if Her Doll ‘Looks Like’ Her

The child taught everyone a lesson when a cashier tried to get this 2-year-old to re-think the doll she picked out because it was black. 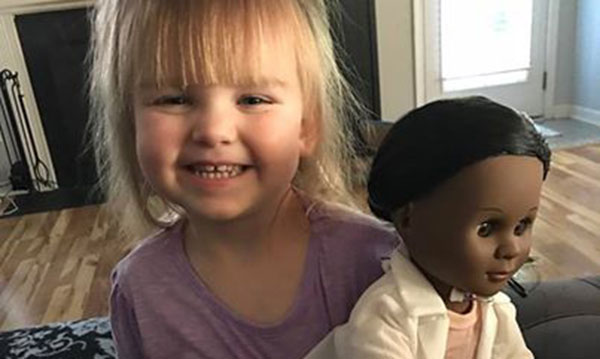 Sophia Benner is a 2-year-old who recently conquered both potty training and responding to casual racism.

As shared by Julie Scagell of Scary Mommy, after having accomplished a successful month of pooping on the toilet, Sophia’s parents Brandi and Nick took her to Target for a gift.

Sophia picked out a doll dressed up as a doctor, but upon checkout, the cashier asked her if she would rather pick out a doll that looked more like her – because Sophia is white, and the doll she was cradling was black.

“Yes, she does. She’s a doctor like I’m a doctor,” Sophia said. “And I’m a pretty girl and she’s a pretty girl. See her pretty hair? And see her stethoscope?”

Sophia’s mother told her Facebook followers the experience reaffirmed her belief that individuals aren’t born with prejudice and to young children, color doesn’t matter. She says her daughter believes “skin comes in different colors just like hair and eyes and every shade is beautiful.”

Social media users have responded to Sophia with overwhelming positivity, and went on to engage in a dialogue about racism and bigotry.

For instance, user David Deftone Cesar wrote, “I think it’s wonderful that her parents allowed her to get the doll of her choice, which happened to be a black doll. It shows her parents have no desire to impede their child’s autonomy and teaches her that people are the same; her comeback to the cashier’s questions was awesome btw. We need the little toddlers of America to come and set the race issues of our country straight lol.”

Other users, like Nanci Lane, wrote that increasingly upfront conversations about race and prejudice since the 2016 election have begun to change her mind about the perspectives the people around her may have.

“My initial reaction is, ‘Really. A cashier would make a judgment and then voice it?’ And I don’t mean a cashier in a ‘less than’ sense. I mean someone in that particular situation would be so inappropriate? Sometimes when I read stories like this it seems like it could be too over the top to be true and that someone’s trying to make a point. If it’s true, well, this is a very aware little girl and that’s great. However, if this is a story just trying to make a point, please be more creative! I recently learned that I really do live in a bubble hear in Southern California. After the election and speaking with old friends from the South, racism is much more prevalent than I ever realized … maybe this really is true …” she wrote.

For little kids like Sophia, the world is a bit more black and white, just not in a racial sense. She sees toys she likes, she thinks doctors are cool and she thinks other girls are pretty regardless of the color of their skin or the texture of their hair.

Perhaps, we would all fare better if we all thought that way again too.

What do you think of this incident? Tell us in comments.