Lonely Baby Shower Pic Isn’t Quite What It Seems

A viral photo tells a sob story about a woman celebrating her pregnancy alone – except people did show up and now generous Twitter users are crying ‘scam.’ 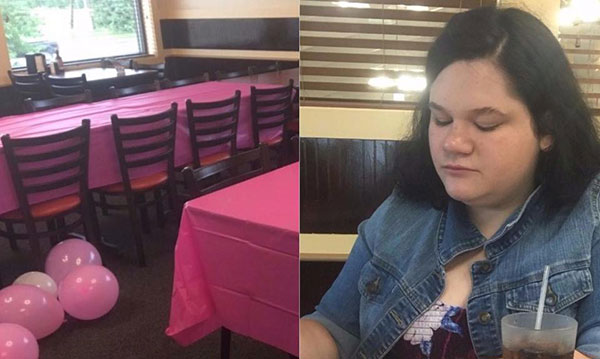 It really is a great feeling to see humanity gather around to help and support the less fortunate. It’s not something we see enough of these days – and that’s probably because of the crass folks that like to take advantage of this kind and giving nature.

And it’s unfortunate too because people that get duped out of their hard earned money are less likely to help out others in the future, which is probably why when the dupers get outed, it’s quite the huge deal.

Take the story of Chelsie Collins. This soon-to-be mom threw a baby shower for 12 at a Golden Corral in Ohio. When only two guests showed up, one of them, Collins’ bestie Dorthy Holmes, snapped a pic of the empty party area and the depressed-looking mom and posted them to Twitter.

The post gained a whopping 16,000 re-tweets and soon the Twitter-verse was asking for an address to send gifts and money to Collins. Holmes tweeted out her friend’s Wal-Mart registry and a link to a PayPal account.

Soon, Collins had been sent more than 350 gifts from generous people that really felt bad for the mommy-to-be.

A happy ending to quite the sad tale, right?

Well, not quite. Some Twitter users got suspicious of the pair and began to poke around. One of them even called the Golden Corral that the party was hosted at to confirm the number of guests.

As it turns out, Collins wasn’t abandoned at her baby shower. The manager at the restaurant confirmed that the party was booked for 12 and 12 people showed up.

Collins and Holmes refute this saying that at “the moment the tweet was posted nobody was there. The tweet was 100 percent accurate at that point in time,” and that while people did show up eventually they totaled less than 12.

They also defended their actions claiming that it wasn’t a scam because they never meant for it to go viral, that they never asked for presents and the post was made to troll the “friends” that didn’t show up at the party.

On the bright side, at least her baby gets the supplies that he or she needs; plus the pair have said that what they will donate the gifts that they don’t use to a local women’s shelter.

So it’s not all bad, but on the flip side, it was incredibly deceitful to accept the gifts without updating the gift givers.

Sometimes people need help and as civilized beings we must help others when we can. At the same time those that don’t truly need help can’t take advantage of those willing to go out of their way for other people.

We’ll probably never know whether or not the new mom truly needed or appreciated the outpouring of support that she got but we truly do hope that she pays it forward and that the people that did donate to her still maintain their good hearts for the next person that could use the love.

If not, that would really be the saddest part of this sob story because the world really could use more people that care.