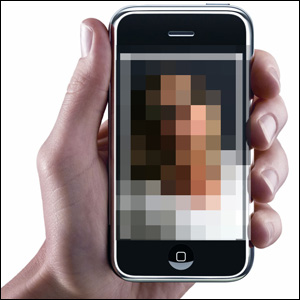 Today's story entails possible snooping, sexting (of an extremely "misguided" sort) – and makes us here at Oh, Mother marvel at how some parents can seemingly put being with a creep over their kid's well-being.

It begins, according to reports, with a fight between Eugene Foster, a 31-year-old Arizona man, and his girlfriend's teen daughter. The girl had apparently taken naked pictures of herself with her cell. Foster found the images, according a Huff Post Crime report, grew irate and, to teach the girl "a lesson" against sexting, allegedly proceeded to mass-text a racy photo – to 38 contacts in the girl's phone.

What followed was a mess of a situation. The bf gets arrested on charges of sexually exploiting a minor. And then, the damage control: A note from her high school alerting "everyone" about the text, notes the local Fox News in Phoenix, and detectives checking with those 30-some contacts to make sure the image was deleted – and not forwarded on to anyone else.

To call it humiliating for this poor kid is putting it mildly – especially when you consider that, according to Elias Johnson, the sheriff for the county in which this happened, "There was nudity; clear full-frontal picture."

Whatever this guy's proclaimed parenting discipline tactic – investigators "do not believe Foster was intentionally trying to exploit the child," noted an Arizona Family report, – his actions were clearly out of line. The issue of underage kids sexting of their own free will can be devastating enough (not to mention, illegal). Now, consider that it's an adult figure who's presumably been entrusted, to whatever extent, with the care of this kid. Further, it’s a man her mother saw fit to date and, it seems, have access to her kid's personal stuff, to whatever extent.

In the words of Alicia Degaugh, a student at the same San Tan Alley high school as the girl, "The mom's boyfriend? That's even weirder." (In the 3TV report, she'd at first mistakenly thought the girl's dad sent the photos; the reporter clarified.)

And what about Foster "finding" or "discovering" the images? Was that out of bounds, too? Maybe he had good reason to suspect it, perhaps the girl even declared it – or maybe it's just a house rule (parents are certainly within their bounds to keep tabs on their kids' digital worlds). Even so, there's no mention of Mom being consulted before Foster hit "send" – and no clear indications that this guy played any sort of clear guardian role.

Beyond that, though, is the bigger – more obvious – point that some issues are best handled privately. And wouldn't it be common sense that something as mortifying, damaging and, ultimately, illegal as this qualifies?

While it's hard to know the exact dynamic of this couple's relationship, it's equally hard to imagine this isn't a wake-up call.