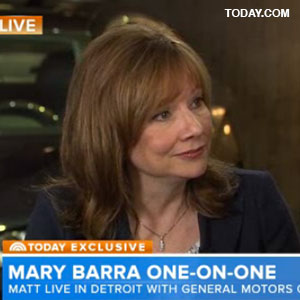 Matt Lauer, host of the Today Show, was in Detroit on Thursday to interview General Motors' CEO Mary Barra. It all started with questions about GM's recent ignition switch problems.

But toward the end of the nearly five-minute interview, when I heard him ask his question related to motherhood, I couldn't help but take to the keyboard to express my annoyance.

"You're a mom, I mentioned, two kids. You said in an interview not long ago that your kids said that they're going to hold you accountable for one job and that is being a mom," Lauer starts.

"Correct," Barra answers, a smile on her face.

"Given the pressures of this job at General Motors, can you do both well?" Lauer asks.

Barra answered the question without skipping a beat. "You know, I think I can. I have a great team, we're on the right path, we're doing the right things, we're taking accountability and also, I have a wonderful family, a supportive husband and I'm pretty proud of my kids and the way they're supporting me in this."

Turns out, I certainly wasn't the only one who was irritated by the question.

Bryce Covert of Think Progress wrote a column about the question, saying, "Lauer himself is a father of three children, but that hasn't stopped him from doing his job, which has included, among other things, traveling to 50 locations for the Where In The World Is Matt Lauer segment, or standing in for Bob Costas to host the Sochi Olympics in Russia."

Jalopnik's Patrick George spoke out, too, making the point that it didn't even make sense to ask her that question in light of other events at GM.

"A lot is at stake with GM's current crisis, from the safety of its customers to the future of the company as a whole. Whether or not Mary Barra can pick up her kids from soccer practice on time is pretty much meaningless to anyone except Mary Barra," he writes.

A reaction that resonated with me most came from the Detroit Free Press' own columnist Tom Walsh.

"Would he ever contemplate asking Alan Mulally at Ford, or Sergio Marchionne at FiatChrysler, if they could be a good CEO and a good parent at the same time?"

Lauer claims he would. He took to Facebook to explain his side of things, saying he was referencing a Forbes article in which Barra talked about missing her son's junior prom and how badly she felt about it.

"If a man had publicly said something similar after accepting a high-level job, I would have asked him exactly the same thing," he wrote.

Of course being a working mom has its challenges sometimes, as Barra addressed herself in the Forbes article, but with the way Lauer's question was phrased, how did he expect her to answer it? "Gee, I don't know if I can handle both, Matt." Yeah, right.

If you ask me, the fact that she has worked her way up to such a high-level position in her career while being a mom proves she's got what it takes to handle both jobs – not that it should even be a question.