Michigan Mom ‘Begs’ for Money to Send Daughter to MSU

This Battle Creek mother will do anything for her daughter – including stand on a street corner asking for college fund donations. 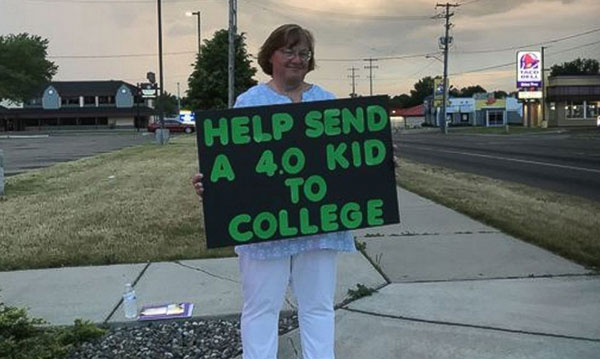 Update as of July 28, 2017: Lori Truex is well on her way to her goal, now having raised enough to fund her daughter’s first semester of college.

Imagine your teen has a 4.0 grade point average and has been accepted to her college of choice – in this case, Michigan State University. Now imagine you can’t make it work, financially, for her to attend.

That’s the position Michigan mom Lori Truex of Battle Creek has been in since finding out her high-achieving daughter, Kendall, was accepted to MSU but realizing she doesn’t have the remaining $24,000 she needs to pay for it, the Oakland Press reports.

So Truex recently started a social experiment – or some might consider it a desperate plea – called “One Mom One Year,” where she’ll solicit donations all around her town, on street corners and online for her daughter’s future college education costs.

“I want to believe that people are good and that (Battle Creek) believes in its children and their dreams and will support them in their educational goals,” Truex writes on the GoFundMe page she started for the campaign.

The Oakland Press reports that Kendall calls her mom an “inspiration” for her efforts. And while some might suggest she consider other options instead (one commenter writes, “The kid should look other places to be inspired – and look at a cheaper college”), it turns out this student has already done that.

“My daughter graduated in 2015 with a 4.015 GPA and the academic excellence award but $0 financial aid,” Truex shares on the fundraising website. “When the acceptance letters began to arrive, I secretly hoped that some would turn her down so it would hurt less when we had to say no. What a sad situation to hope your child doesn’t get into a college.”

So Kendall went to community college for two years before applying to transfer. After getting accepted to MSU a second time, her balance would be $24,000 after accounting for grants. The family (mom’s a school bus driver and dad works in a factory) says they’re already paying off more than $60,000 from their older daughter’s college education – the payment is $418.02 per month, Truex says, and “only one penny goes toward principle,” mom writes – and their hopeful future Spartan works “three jobs as a lifeguard,” working the teen job circuit.

“We live in our ‘starter house’ with a mortgage, don’t drive expensive cars or take fancy vacations,” Truex says on the site. “Our children were raised to understand the bills come first!”

So it’s easy to understand why this mom will be standing on street corners asking for donations – with full documentation of her daughter’s grades and where the money will go, by the way. Who can blame her for trying to help her daughter fulfill her dreams?

But there are naysayers, of course.

“The ‘kid’ is 19 or 20 and should be applying for on-campus jobs, grants or work/study programs, especially if they are going to MSU,” one reader commented on the Oakland Press story. “We are a Spartan family, and we have all benefited from on-campus jobs.”

It’s unclear if Kendall will be working through college, but either scenario shouldn’t discredit her mother’s efforts to let her avoid the massive student loan debt most students face and the stress associated with it.

Another commenter was more positive: “I give the mother a lot of credit to ask citizens for donations and hope she reaches her goal.”

I feel the same. And I think I’ll donate when I get home.

What do you think of this mom’s efforts to help her daughter go to college? Would you ever “beg” for donations? Tell us in the comments.