It's normal to be excited about a bouncing new baby, but the Washington Post's Miss Manners argues over-the-top gender reveal parties are taking it too far. 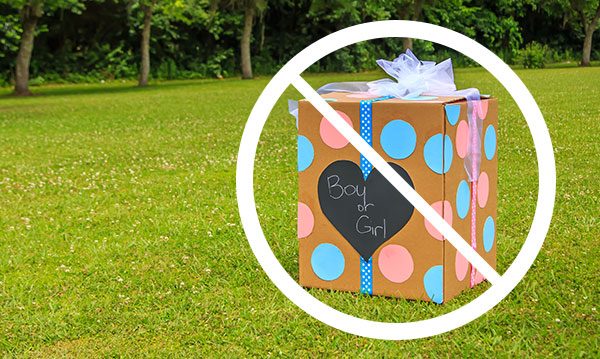 Gender reveal parties have become a burgeoning trend among expectant couples who are buzzing with excitement.

You know the drill: Parents-to-be ask their OB/GYN to write the gender of their child on a note card (without telling them) and seal in an envelope. From there, parents or a family member or friend deliver the envelope to a baker who baked a blue or pink cake, hides the “answer” with icing, and the gender gets revealed at first slice.

When an expecting parent wrote in a question worrying about whether or not a gender reveal party would come across as a gimmick to receive gifts, Miss Manners columnists, award-winning writer Judith Martin and her children Nicholas and Jacobina, replied with the following:

“Yes. Miss Manners believes that your intentions are good and that you simply want to share joyous news. So she hates to be a wet blanket (in a gender-neutral color, of course), but feels compelled to tell you something that will save you time and friendships in the future as a mother. Not everyone is as excited as you are about every detail of your child’s life. It’s best to know this now, before you start going on Facebook announcing baby’s first spit-up, or throwing parties for when he or she sleeps through the night.”

The column also mentioned instances of gender reveal parties where guests form teams and mothers-to-be end up unable to hide she isn’t having the gender she wanted in front of everyone she knows.

“Gathering around a party waiting to hear and celebrate the announcement of one of only two possible choices is not a party-worthy event – and it is not dignified.”

So instead of turning this new development into a whole shindig, Miss Manners suggested parents might get more satisfaction from sharing (or identifying) their baby’s gender to their friends and family members one by one.

While it’s true not every little thing needs to be celebrated, can you really blame parents for wanting to gather up a crowd and publically burst with excitement?

The response to Miss Manners bold rejection was split, with valid points coming from both pro-party and anti-party sides.

“Thank you Miss Manners – Found out you’re having a girl (or a boy, or 2 of each)? Congratulations! I hope she/he/they are all healthy! And… DONE. I do NOT need to go to a party for a few hours, bring SOME sort of gift (because let’s face it, you’re NOT showing up empty-handed). To get some sort of cutesy reveal that you could have texted me. Invite me over with a couple of friends, we’ll have a lovely meal and you can share the news then,” writes commenter Kairiste.

On the other hand, commenter Tracy Simmons Hancock offered a counterpoint.

“Go ahead and have the party,” Hancock writes. “If you want a reveal party, then have one. I personally like the idea of having just family and close friends over for a simple party where you record the reveal and post it to your social media to share with all the people you call friends, but wouldn’t have called personally to tell. Keep it simple, is the best motto.”

The argument between these two camps goes on for a string of more than 500 comments.

In the end, the people who love you will show up for whatever you choose – whether it’s going to a big party, liking your social media post, or bursting with joy when you tell them in a private setting face-to-face – because the most pressing and important manner on hand is this: you have a baby on the way, and that is amazing.

What do you think of gender reveal parties? Tell us in comments.