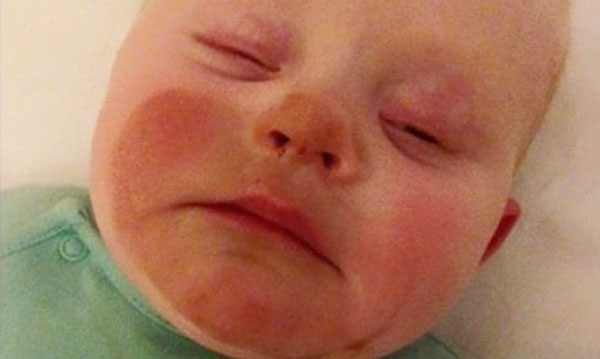 There is no such thing as the perfect parent. Sure, mom and dad can do right by their kids and raise them to be great adults, but there will be blunders along the way.

Take Gemma Colley’s parenting fail, for example. The Independent reports that this UK momma made the silly mistake of breastfeeding her son, Cooper, after she got a spray tan for an upcoming wedding. The bronzed booby turned Cooper into a teeny version of Willy Wonka’s Oompa Loompas – with a beard – and left Colley mortified about her mistake.

Lucky for Cooper, the best spray tanners use dihydroxyacetone, or DHA, as their main ingredient, according to organicauthority.com. DHA is made from plants like sugar cane or sugar beats and causes a reaction on the top of the skin that darkens it. It is considered non-toxic and noncarcinogenic.

Which means that he was probably not harmed from his meal. Even better, his beard came off with a couple of baby wipes.

Despite her embarrassment, Colley took to the Internet and posted a photo of her baby’s 5 o’clock shadow to The Unmumsy Mum Facebook page, in an effort to prevent other parents from turning their kids orange.

People began responding to the post and it quickly went viral, with more than 50,000 shares to date. Instead of attacking Colley for her blunder, however, parents came out of the woodwork to share the “whoopsies” they made with their kids.

One mom even shared the time that she accidentally Naired her daughter’s head and blamed her daddy before realizing the mistake.

Stories like these just go to show how difficult parenting truly is. Even though parents think that they are doing something right, like breastfeeding their baby, something could go wrong.

It’s great that so many parents bonded together to make this mom feel a bit better about not being perfect. Mistakes happen and, provided baby isn’t being hurt, it’s OK to laugh at your parenting mistakes. We think this one is pretty hilarious!

So, Metro Parent readers, do you have any hilarious parenting mishaps you’d like to share? What do you think of Colley’s blunder? Let us know in the comments.