Mom Angry about Mock Award her Daughter Got at School 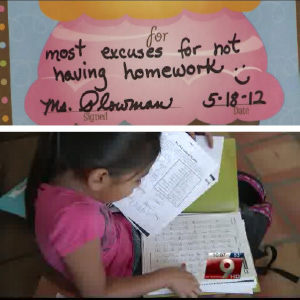 Instead of being proud of the award that her 8-year-old brought home from school May 18, Tucson, Ariz. mother Christina Valdez was incredibly upset.

Her daughter's teacher had given all of the students in her class awards at the end of the year, and little Cassandra came home with the "Catastrophe Award" – for the most excuses for not having her homework.

The third grader showed her completed homework to the local KGUN9 news station in a neatly labeled folder. That's apparently the norm, according to mom – which is why the mock award left her confused.

But beyond that, Valdez was extremely put off with the way the teacher announced the award in front of the class – with everyone laughing, leaving Cassandra feeling humiliated. To her, it broached bullying. Valdez contacted the school's principal, who reportedly told her it was simply a joke and teachers joke with students all the time.

"I think it's cruel, and no child should be given an award like this. It's disturbing," Valdez told KGUN.

Now, I can recall a few times in elementary school (much more so in middle and high school) where this happened to me and other students. In fourth grade, a boy named Jimmy sat next to me and always kept his desk in complete disarray. More than once, our teacher would come over and dump out the contents of his entire desk in front of the class, forcing him to pick up every single supply and put it away with everyone watching.

Another time, while playing with a different boy in fifth grade, I jokingly stole his calculator. He complained to our teacher and she made a loud joke to the whole class that I must have had a crush on that boy. My cheeks burned as I stared at my desk in shame.

Not much fun, in the moment. By the next day, though, I – along with the rest of the class – had totally forgotten about the incident.

But others feel that this "joke" was totally inappropriate. A writer called allthecolors commented on the Huffington Post story that young children like Cassandra are extremely vulnerable and not mature enough to understand the adult sarcasm of the joke.

"The teacher giving the student a 'catastrophe award' is completely inappropriate and does not do anything to positively affect the student – intellectually, personally or socially," allthecolors said. "I feel embarrassed for the teacher, whose actions were in no way professional."

Others, however, felt that this sort of action was appropriate for the situation.

"I like the fact that this teacher brought shame and embarrassment back to the classroom. Those are two motivating factors, believe it or not," C J Sdsu chimed in on the abc15.com article.

And in a blog post on The Stir, Julie Ryan Evans said that the focus of this story should also be on the mother's reaction – not just the teacher's.

"Look, while I don't think the award was the best move on the teacher's part, I think the mom's reaction will do a lot more damage to the girl in the long run," she said. "Instead of just telling her to brush it off as a bad joke, she's teaching the girl to take herself way too seriously."

Making a joke out of Cassandra's homework performance in front of the class might have been less embarrassing for the girl than getting yelled at. Still, a parent's instinct to protect her child from negative feelings can definitely drive a mama bear to make a big deal out of a light incident like this.