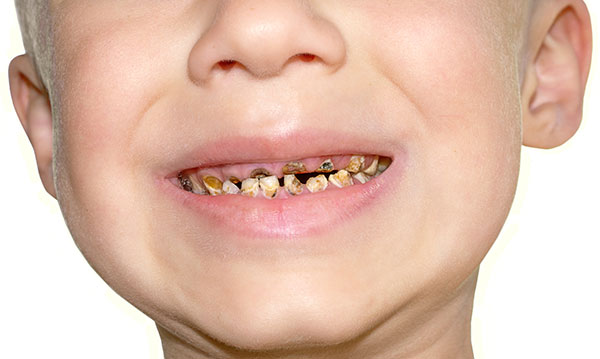 A mother in Florida was recently arrested for child neglect after apparently failing to address her daughter’s dental needs to the point where the child’s teeth were blackened and rotting.

Catlyn Haley, 21, was arrested last week in Bay County, Florida because she ignored multiple requests by doctors to have the child’s dental problems treated, according to the Panama City News Herald.

The 4-year-old girl had “severe cavities” and says that she doesn’t brush her top teeth because it hurts when she does, the newspaper reports.

Police say a dentist recommended surgery for the girl in March 2014 and scheduled a date, but the family later told the office they did not plan to go forward with the procedure, according to the article.

A medical provider with the Department of Children and Families reported almost a year later that the child’s teeth were in terrible condition and the family was advised again in July that the girl needed immediate medical attention, the News Herald reports. Police say all of those requests were ignored.

Our hearts go out to this little girl who was surely in a lot of pain due to her tooth decay. There’s no doubt that some action was required to make these parents treat their daughter’s dental condition, but it’s unclear how the mother’s arrest will address the situation. What is being done to actually help the girl get the urgent care she needs?

It’s also important to point out that there’s no record of the dad’s arrest thus far, the newspaper reports. If mom is at fault, isn’t dad equally responsible?

Haley has reportedly said that they couldn’t afford the surgery but child advocacy officials say that isn’t an acceptable excuse, according to WJHG in Panama City.

If the family couldn’t agree to treatment because of financial reasons, a support system should have been in place to help the girl get the care she needs. It’s possible that the parents sought out assistance but found no help available. In a country where healthcare is a privilege and not a right, we sadly wouldn’t be surprised.

And while commenters are quick to point to Medicaid as the solution, there are countless families who don’t qualify for the program but also can’t afford the high cost of a dental surgery.

As the story gains national attention, outsiders are also quick to shame the mother for the bad parenting habits they assume led to the girl’s cavities. But this child is only 4 years old and she was just a toddler when her tooth decay was already so bad that it required surgery. Such severe decay in a child so young could mean she’s predisposed to tooth decay – after all, some kids are at much higher risk regardless of their dental habits. This little girl’s parents – good or bad as they may or may not be – might not have been able to do anything to prevent it.

Parents of children with early tooth decay also face a difficult decision as surgery with general anesthesia comes with risks of its own. Parents should be able to decide what type of treatment is best and if the risks of surgery were too troubling, we hope they were informed of other options like milder sedation or nitrous oxide and Novocaine – though it’s possible the girl’s decay was too significant or other factors ruled out those choices.

The need for major dental surgery among preschool-age children is a growing problem in families of all income levels, according to a New York Times article on the topic.

The basic presence of tooth decay does not imply neglect, especially in a toddler or preschooler. But failing to address it for years and leaving a child to suffer pain and potentially fatal complications is another story.

If neglect is present, by all means the child should be taken to a safe and loving environment where she can also obtain the treatment she needs. We just hope there’s a plan in place to actually make sure that happens.

Do you think the mother should have been arrested? Tell us in the comments section.