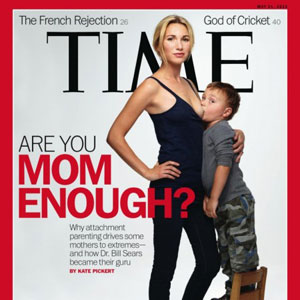 Breastfeeding babies in public causes a stir. Whether it's Beyonce nursing her new arrival at a restaurant or a mom getting kicked out of a Target for feeding her 4 week-old while shopping, these stories always seem to grab the public's attention – and eyes.

So, on the cover of this week's issue of Time Magazine, what better way to get blogs buzzing than featuring a hip blond mom breastfeeding her child? Not just any breastfeeding mom and child, mind you, but 26 year-old Jamie Lynn Grumet of L.A. feeding her son, Aram – who's 3.

He's standing on a chair in order to reach her breast.

As if the startling photo didn't raise enough eyebrows, the headline – "Are You Mom Enough?" – has moms around the country heating up Facebook. It's all stoking a pretty hot question: Has attachment parenting become the new standard for mothers?

In addition to extended breastfeeding, attachment parenting also includes practices like co-sleeping and "baby wearing." It's a term originated by Dr. William Sears and his wife Martha Sears, and it's drawn lots of interest – and backlash – over the years.

Not surprisingly, the Time cover's sparked a web war between moms who defend the concept and the "traditional" set.

"I'm more disturbed by the title of the article. 'Are You Mom Enough?' I'm sorry… 'Mom Enough?'" Chrissy from Conroe, Tex. commented on a Yahoo news blog about the cover. "So this woman is deemed more of a 'mom' simply because she chose to breastfeed her child until he was damn near as tall as she is?"

There are those coming to the mom's defense, too, and showing their support. Most of whom also practice attachment parenting.

"This is what attachment parenting is all about – natural parenting, following your instincts and letting your child take the lead," Noelle says in a comment on chron.com. "I'm expecting baby No. 2 and plan on breastfeeding past age 2, as well. I think it's awesome and beautiful and brings mothers and babies closer."

In the Time Magazine interview, the cover mom herself agreed.

"People have to realize this is biologically normal," Jamie Lynn Grummet said in the article. "It's not socially normal. The more people see it, the more it'll become normal in our culture. That's what I'm hoping. I want people to see it."

Whether you're for or against attachment parenting, people from both sides agree that the cover accomplishes what it set out to do: get attention.

One-third of U.S. children take nutritional supplements — but whether they need to is another question. Get yourself educated on children's vitamins.
Read more
Sponsored Content

Brought to you by Gateway Pediatric Therapy
Read more
At Home