Her son actually died in the hospital on Halloween but came back to her, so for his first birthday, she celebrated by turning him into the living dead. 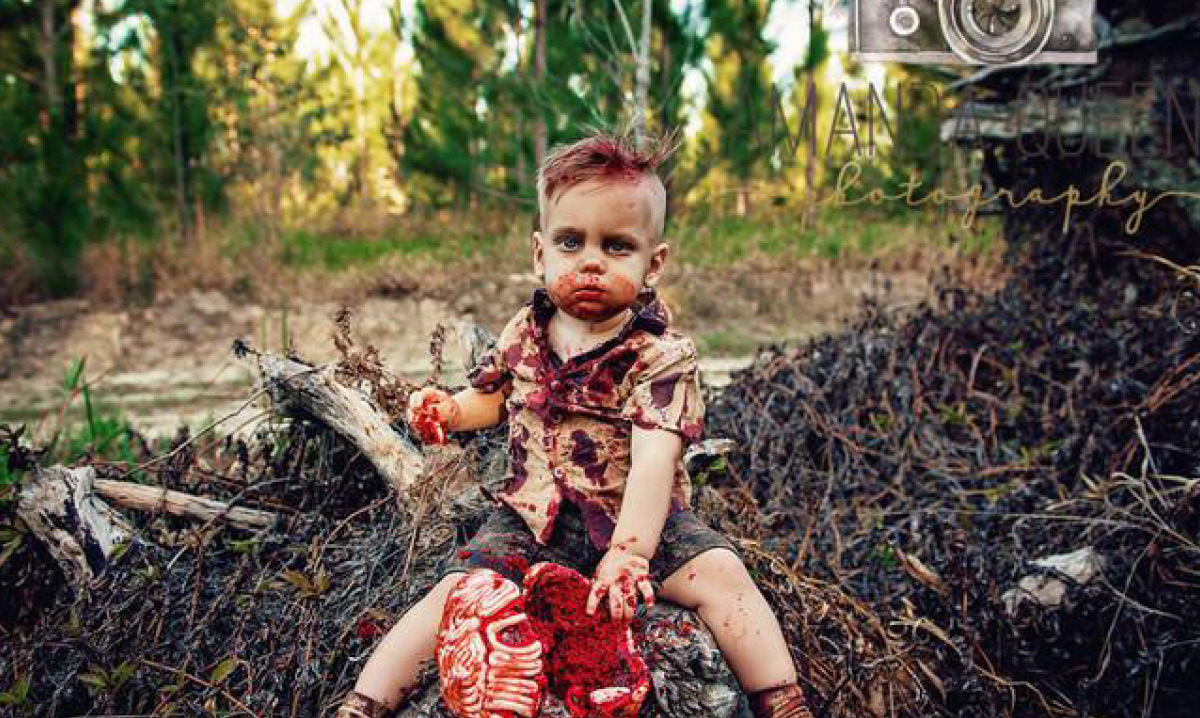 When I think of zombie babies, I picture the screaming corpse of the just-born infant in Dawn of the Dead. It was creepily cute but it also wanted a bite of brain, which meant that like all zombies, it had to go.

But now that I’ve seen one Brisbane, Australia baby’s zombie-themed photo shoot, and heard the story that inspired the delightfully disturbing images, I might change my mind on whether or not a zombie baby can hang around – unless we do actually succumb to a zombie virus because your girl isn’t getting bit.

See, the baby in the picture is Phoenix and he died when he was born. His mom, Amy Louise, suffered from extreme morning sickness known as Hyperemesis Gravidarum, and at just 36 weeks into her pregnancy her placenta tore from her uterine wall.

She was rushed to the hospital on Halloween and was told that her baby didn’t have a heartbeat so he needed to be delivered prematurely. A doctor broke the news that her son had died and for 13 minutes, she grieved her loss. But as she was getting a blood transfusion a nurse cried out “Thank you! He’s come back, He’s come back!” And she was eventually able to take her son home.

But even before Phoenix came back from the dead, his parents were calling him “zombie baby.” See, mom was supposed to dress up all 28 Days Later with a fake zombie baby head bursting from her stomach for Halloween – her son’s miraculous entrance into the world just made the nickname permanent.

Fast-forward a year later and Phoenix is doing great. His mom wanted to celebrate his birthday with a photo session, and what better way to celebrate her little zombie boy than turning him into a real-life (…er real-not-life) zombie?

She dressed him up in tattered and “bloody” clothes and did his makeup to emulate the sunken features and soulless eyes of a hunger-driven, undead monster. Then, she bought a red fondant brain smash cake and let the little dude tear into it in front of a professional photographer.

In traditional toddler-style, Phoenix ends up covered in red cake and goo from head to toe and mom gets some of the most hauntingly fantastic photos I’ve personally ever seen – seriously, sorry Sophia but I think this kid might have taken your spot as my favorite zombie child ever.

Mom posted some of the photos to Facebook because they were really effing cool, but instead of appreciating her son, his story and the art behind the photos, the true brain-dead zombie freaks of the internet came out to complain.

Without knowing the story behind the images, they called her a bad mom and told her that she was scaring her kid. Some even went so far as to tell her that Phoenix would be a serial killer because of it … puh-lease!

Her “obscene and offensive” pictures even got her removed from some mom groups, but she didn’t care. And I’m super proud of her for that because she dared to go outside of the box to celebrate her kid and isn’t apologetic for it.

It’s hard enough to be a mom without people being nasty about everything that you do. Rude comments on something like a fun photo shoot are so not necessary and happen way too often.

So her kid ate some brains… We all know that kids have eaten much worse. Just saying.

What do you think of these photos? Would you do something far out to celebrate your kid? Let us know in the comments.