Mom Closes Living Room to Get Ready for Thanksgiving 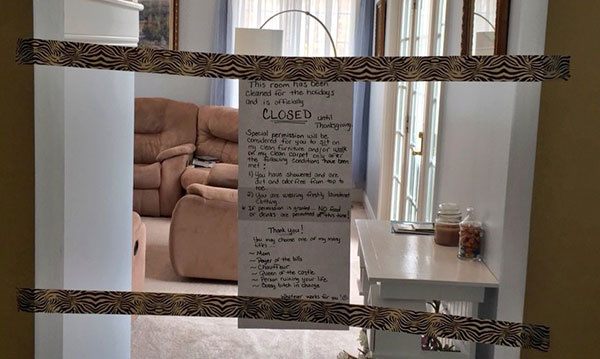 When you have kids, cleaning can seem futile. The minute you think the house looks great, you turn around and find a new mess your little ones just made.

We all know the feeling. In fact, it’s pretty well summed up in this viral video of a toddler removing clothes from the dresser drawers just as quickly as mom puts them away neatly. It’s been viewed more than 11 million times, so it’s clear the idea resonates. Keeping a house clean with kids isn’t easy.

As parents, we can’t help but laugh about it. We know having a spotless home isn’t a top priority right now. Well, except for this one little exception: when you’re having company.

Yep, the holiday season and its parties can bring about a whole new cleaning frenzy totally outside the norm. Has it been too long since you’ve felt it? Let this hilarious parody video remind you.

So with that in mind, it’s not difficult to understand why one mom decided to completely close off her family’s living room from now until Thanksgiving.

Her son Nick Denbow posted to Twitter with a photo of the taped-off living room and the off-limits sign that accompanied the barrier, AOL reports.

“This room has been cleaned for the holidays and is officially CLOSED until Thanksgiving,” the sign reads. “Special permission will be considered for you to sit on my clean furniture and / or walk on my clean carpet only after the following conditions have been met…”

Those conditions include being freshly showered, dirt- and odor-free and clothed in something freshly-washed. Even if permission is granted, “NO food or drinks are permitted at this time!” the note continues.

“How my mom just gonna close down the living room for a month?” her son commented on Twitter, AOL reports.

It might seem cold, but we can see where this mom is coming from – assuming the family has alternate hangout locations for the kids, of course. Judging from the photo, the living room in question could be a more formal space versus the primary family room. If that’s the case, we say more power to her. The room looks great and who could blame her for planning ahead to save a little sanity?

Not everyone agrees though. “So, if during Thanksgiving some unwitting guest accidentally messes up her pristine living room, what’s she going to do? Probably re-clean immediately after Thanksgiving and close the room off again until Christmas!” user Just Me-Me commented on the AOL article. “I’m all for a clean home but this is just silly.”

On the other hand, some people – like those who grew up with plastic-covered couches or off-limits sitting rooms year-round – say the kids in this family have it easy.

“Give me a break, I married into a family that had a ‘living room’ no one was allowed in except for holidays,” user Pharmtek commented.

What do you think? Is closing off the living room taking holiday party prep too far, or is this mom onto something? Tell us in the comments.