One Michigan woman proved moms strong by getting up and married just hours after giving birth – and dad proved his appreciation by making it all happen. 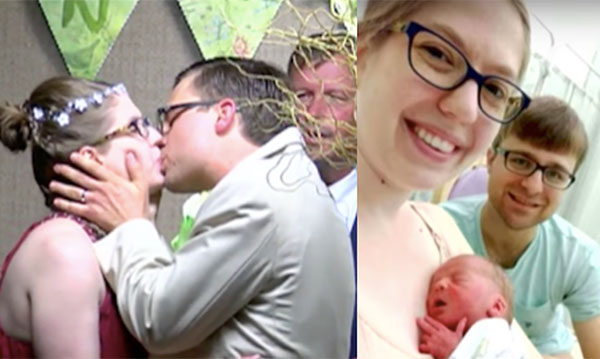 Moms. They truly are something, aren’t they? If they aren’t shuttling kids around or changing diapers, then they’re cleaning house or working outside of the home.

And don’t even get us started on childbirth. I mean, who really likes vomiting, hemorrhoids and that awkward first post-labor poop? It’s a painful and tiring (yet totally worth it) process that has most women conked out for at least a few hours after the fact. But not Jael Pulcipher.

This Michigan mom gave birth to her daughter six weeks early on July 29, the day that she and her fiancé, John, had planned their lakeside wedding.

For most couples in their situation, the simple solution would be to eat the deposits on whatever was purchased for the event, cancel the event and perhaps invite a few close family members up to the hospital to celebrate your child’s birthday.

But not this couple. Instead, with a little help from hospital staff, John moved and set up the wedding at the hospital while the new mommy rested up. And just five hours after giving birth to their daughter, Briar, Jael walked down the aisle in the hospital’s conference room.

“I told her if you can’t come to the wedding then I’m going to bring the wedding to you,” John Told UpNorthLive.com. “So that’s what we did here, but it took everybody. This isn’t anything that I could do by myself.”

This definitely wasn’t some minor shifting of details for dad. This was likely a huge undertaking for him and I’ll bet, despite it being a bit different than she imagined, mom will never forget what he did for her.

It’s always wonderful to see people doing for one another, even if it is for family. Too many people are apathetic about things these days and it’s really great that at least some people are willing to go above and beyond for others.

Jael went through the hell that is labor and delivery to bring life into this world, not to mention the stresses of delivering early. John saw that and he decided to remove all doubt that he appreciated her and the hard work that she had done.

What do you think of this makeshift wedding – and has your significant other gone out of their way to do something sweet? Let us know in the comments.

Want to find a restaurant the whole family will enjoy? Here is a list of places to try out.
Read more
At Home