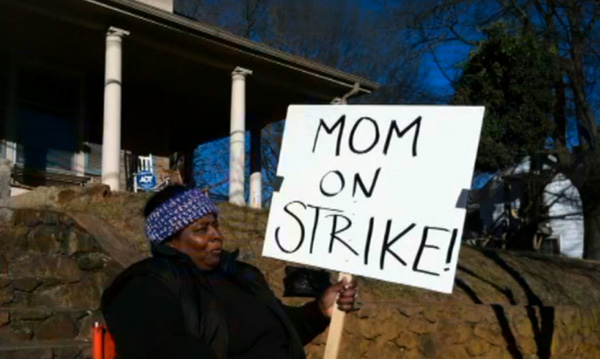 Take the “S” off your chest, lose the cape and admit it – being a single mom is not easy and sometimes you just want to fly away and save yourself.

And, that’s kind of what North Carolina mom Naasira Muhammad did when her two teenage daughters became out of control.

“I’m to the point where I’m just so frustrated, so to keep my hands off my kids or to keep me from doing something crazy, I just decided to go on strike,” Muhammad told WFMY News 2.

Muhammad’s breaking point was when one of her daughters keyed the family’s new minivan.

For days, Muhammad carried a sign reading “Mom on Strike” and marched up and down the street outside of her home in hopes of teaching her daughters about respect and appreciation. In response, the girls’ aunt forced them to make signs of their own. One sign read: “Thank you mom for providing for me, caring for me, and loving me.”

Muhammad’s strike quickly gained public attention. Many were in support of Muhammad’s act of surrendering. Commenter Marcia Lopez Koontz said “God bless her! All mothers who are having trouble should follow suit … maybe the message will get to the young ones who are hurting us mothers despite our efforts to create good, socially abiding citizens.”

Then, there others who blame the mother for the teens’ behavior and feel that it should’ve been addressed sooner. On the Huffington Post, commenter Wendy Madevu said, “It’s the mother’s fault. If you allow kids to behave unruly their whole lives with no consequences then what does she expect?”

So let’s face it: Every mom can’t be perfect and sometimes it get’s overwhelming – especially when you’re outnumbered by your kids in your own home. Having two spoiled girls myself – ages 5 and 3 – I sometimes mentally pack a bag and imagine myself on an island in paradise because yes, it get’s pretty bad at times dealing with two different attitudes. If they grew up to be unruly, would I start marching up and down my block? Probably not, but they would be marching within the next couple of years when they are shipped off to the army. That is a sure way to teach them discipline and respect for authority.

What do you parents think?