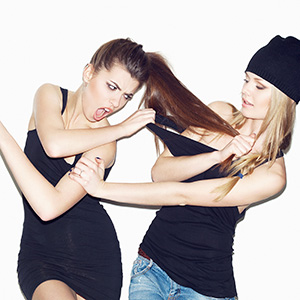 If leading by example is a parenting maxim, a Pennsylvania mom or two have some hardcore recalibrating to do.

While scanning the parenting web-news scene, a recent story out of Upper Darby caught Oh Mother's eye. It was about 36-year-old mom Nicole Edna Holton, who allegedly "arranged and was witness to (a) cat fight" – between her teenage daughter and a classmate, according to delcotimes.com, the website for the Delaware Count Daily Times.

The catalyst of the brawl, which went down in a gas station parking lot, was an "ongoing battle between the two girls about boys," the town superintendent told the newspaper, adding, perhaps unnecessarily, "This is stupid parenting."

But that's not how mom Holton sees it. She said the girls' high school was at fault for apparently not intervening: "These girls have been having issues at the school with each other, so I let them handle it," she told police, according to the report.

Curiously, this isn't the first headline-grabbing case like out of Upper Darby which, according to Wikipedia, is notable as the birthplace of both Tina Fey and Cheri Oteri. But, unlike SNL, there's really nothing funny about either of these incidents.

The other happened back in March of 2013. In that case, 45-year-old Michele Davenport, also of Upper Darby, forced a fight between her daughter, who was at the time 12, and, again, a peer – a girl who had allegedly been bullying her child – in a school parking lot. "I want to see her kick your ass, that's what I want to see," Davenport allegedly egged her child on – in expletive-littered footage a bystander happened to capture on a cell phone, later posted by Fox 29 myfoxphilly.com.

The results were not pretty. The "attacking" child wound up with a bloody nose, the report said – the "defending" girl, a concussion. That mom's motive? She apparently wanted her kid to "stand up for herself," Fox 29 reported. (At last report, she'd waived her right to a preliminary hearing; it seems to have fizzled from the limelight since then.)

Parenting comes with an inherent passion to protect your kids. But again, so often, it's your example that sticks. Sadly, both Davenport – and, more recently, Holton – acted on that passion in a destructive way that not only damaged their daughters, but also left muddy tracks on the web.

Or, as the same town superintendent more pointedly declared of the 2013 incident: "The mother acted like a moron," Fox 29 reported, "pure and simple."