Mom Jailed When Kids Were Late to School Seven Times 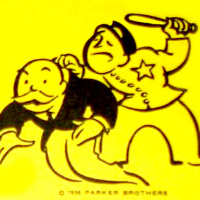 Morning madness can delay even the most punctual parent. But arresting a mom when her kids are late for school? Apparently, the answer was yes for one Virginia woman – after what amounted to her seventh offense.

That's according to what she told FreeRangeKids, the popular blog by syndicated columnist Lenore Skenazy (author of "Why I Let My 9-Year-Old Ride the Subway Alone" fame).

As "A Virginia Mom" tells it, the cops showed up to handcuff her on a recent Saturday night. She'd previously met with a truant officer after delivering her three elementary-age girls to school late five times – which, according to her state's code, is routine when kids are "absent without awareness and notification from a parent," she explains.

"My truant officer seems to miss the rather obvious distinction between absence without a parent's knowledge, and tardiness." AVM says in her note to FreeRangeKids. "Our latest has been, on average, less than 10 minutes."

In other words, she was well aware of where her kids were. Despite her (presumably) best efforts, they'd just barely missed the bell.

Two more cases, however, were enough to spark legal action. Three officers appeared on her porch on Jan. 21, the letter goes, and took her to an adult detention center. She was due in court for a Jan. 25 arraignment or faced a $3,000 bond.

To boot, AVM says, her and her kids all have "medical care for disabilities," including ADHD, "which the school is very aware of."

"I find it not only a waste of resources and taxpayer dollars to engage our police and courts for this," she says, "but also an absolute failure on the part of our school to service those with disabilities with any sort of empathy and understanding."

Yikes. It definitely caught the attention of Skenazy, who featured it as her "Outrage of the Week." In this case, she argues, "the fear of children being neglected or falling behind has gone overboard."

And while it's a jarring scenario, it reflects a growing trend, notes HuffPost Parents, which quickly picked up on the story. In other states, punishments range from potential charges against parents for 10 absences sans doc's note (that'd be California) to Alaskan legislation looking to fine moms and dads $500 for each day missed.

Whatever the rules, HuffPost columnist Lisa Belkin says, the bigger question is, "Does prosecuting a parent actually work? And what falls within the logical realm of what you prosecute them for?"

Certainly not running a bit behind under extenuating circumstances, says AVM – whose official charge is "contributing to the delinquency of her minor children."

Her exasperation is palpable. And a little heart breaking.

"While it is debatable whether or not I am a decent mother," she says, "even if I were not, it would hardly be criminal behavior to be so imperfect."