Mom Leaves Infant in Car with Note While She Shops 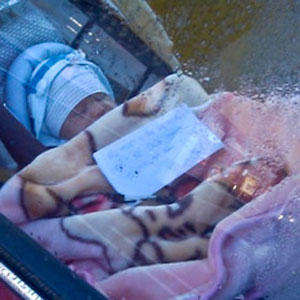 It's a no brainer: You don't leave children or babies alone in your car alone. Ever. It's dangerous for a number of reasons – ranging from physical safety to health. So why do people do it?

In the case of this New Zealand mom, it's because she was shopping. It's no joke: The mom left a handwritten note, according to The New Zealand Herald, affixed to her tyke's blanket to say so.

Passers-by could plainly see the sleeping infant alone in the car, and a couple who saw the baby told The New Zealand Herald the note was written from the baby's perspective.

"It said, 'My mum's in doing the shopping, call her if I need anything,' and it had the cell phone number," the unnamed man told the Herald.

"We waited there for a little bit, wondering if the mum was just going to be two seconds and come back. And my wife said, 'I'm not going in without someone being here with the baby,'" he said.

Somebody did call the mother, according to a Yahoo! article – and in the meantime, someone snapped a picture – that would cause an uproar on the web.

"Why do you need parenting classes? Isn't it common sense NOT to leave your infant child in (a) car alone????" user Lori commented on the Yahoo! article about the incident.

And here's a revolutionary idea, proposed by user The Crossing Guard on the same article: Take baby with you while you shop.

"I didn't have a car or a baby sitter, so I had to take my baby shopping with me every time AND carry the groceries home in one of those wire carts. I had to carry him in one of those backpack carriers," The Crossing Guard commented. "I survived. He survived."

Possibly even crazier: Although it's illegal in New Zealand for parents to leave little ones under 14 alone "for an unreasonable time or in unreasonable conditions," police aren't punishing the mother. In fact, they aren't even looking for her, according to the Yahoo! article, because "no one has filed a formal complaint."

Here's our advice: If you have a baby, and you don't have somebody to watch him while you're out, whip out the old-fashioned stroller and take him with you. Don't feel like lugging the babe? Tough. It's called being a parent.