Mom Outraged After Kids Get Moldy Juice Boxes at School

Isn't anyone checking the expiration dates? One parent is demanding answers. 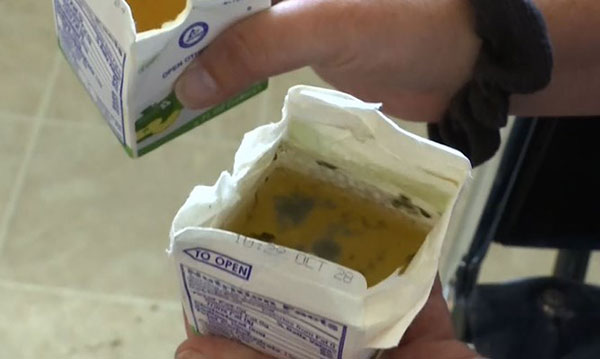 There’s gross, and then there’s this.

As parents, we spend a lot of time thinking about what our kids are eating. We research healthy meal ideas, push nutritious snacks, offer vitamins and limit sweets. We buy the watered-down juice boxes, toss iffy produce and obsess over expiration dates.

So when California mom Linda Lujan realized her kids were given moldy juice boxes at school recently, we can imagine just how she felt. Disgusted would be an understatement.

The mom from Orcutt, California says her 10-year-old son and 6-year-old daughter came home from their elementary school with the moldy apple juice boxes inside their lunches, Tucson News Now reports.

“When I was jostling [the juice box] around, I saw something floating in it,” Lujan told a news station. “I ended up ripping open the top and saw just a whole bunch of filth.”

The expiration date on one of the juice boxes was the same day it was brought home, while the other juice box had expired on Oct. 28 – six days before it was served. A district spokesperson reportedly said the district is currently investigating the juice box incident.

Naturally, the concerned mother is hoping the same thing won’t happen to other kids. She says the district should warn students to check their juice boxes.

“Warn people. Let them know that, at least have your kids look at their drinks,” Lujan says. “They could kill somebody. They could kill a child, and I know that the Central Coast cares about our kids.”

Dean Foods distributed the juice boxes and the company is also working to find out what happened, Tucson News Now reports.

Checking expiration dates on food being served seems like an obvious step that any kitchen would take. And we have no doubt that it’s probably part of the process for most day cares, schools and other places that serve our kids. But that step and other quality control measures clearly weren’t taken at this school – and it should probably serve as a wake-up call to parents there and elsewhere. Especially since unfortunately, moldy juice boxes have been reported before.

This particular article says ingesting mold-infected juice isn’t typically associated with health problems, but it’s not really a risk any parent wants to even think about. With that in mind, it might be smart to teach your kids to check expiration dates and how to look for signs of mold or bacteria growth on food and liquids.

In the meantime, consider it another reason to pack your kids’ lunches this year. Water bottles instead of juice boxes are looking pretty good right now, too.

Have you ever noticed a moldy juice box? What would you do if your child brought one home? Tell us in the comments.