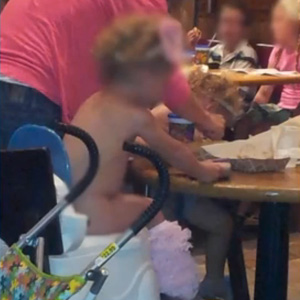 Potty training is time consuming. Mom and dad have to be ready to run their toddler to the bathroom quickly and constantly, which means being near a toilet at all times.

But for one mom in Utah, that meant lugging a training pot along when leaving the house – including to a public restaurant.

Now, bringing a training toilet in public – and to a restaurant, no less – may seem unorthodox on its own. But when mom whipped out the tiny toilet at the dining table during mealtime, things got weird.

The mother allegedly undressed her two small children and let each child sit on the potty while eating at Thanksgiving Point Deli, according to Utah news station KSLTV. The station interviewed Kimberly Decker, a disgusted witness who snapped a pic of the scene.

"She had to undo the jumpsuits and take them all the way down so they were completely nude, with the jumpsuits down to their ankles, just eating their chicken nuggets, sitting on little toddler potties," Decker told the new station.

Erica Brown, a spokeswoman for the restaurant, told KSLTV she was unaware of the event when it happened, but told the station she thinks, "state and local health codes were probably an issue, as well as just social norms."

But – questionable health issues aside – shouldn't parents teach their young kids where they should be using the bathroom? Like, maybe, the bathroom? And what about teaching them how to be clean? Clearly, those ideas didn't come into play here.

Bottom line, parents: If you're potty training your tot, train them to use the bathroom properly and appropriately. But most importantly, keep the training away from the dinner table.