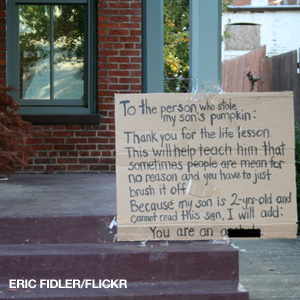 It's that time of year. Homes dress up in orange and black in the spirit of Halloween, and families bond by creating and setting out unique decorations. Neighborhood porches are occupied by scarecrows, witches, skeletons and, of course, pumpkins.

Unfortunately, a number of those wind up stolen or smashed each year. But not every family takes it without retort. Becky Reina is a great example.

The Washington D.C. mother of two added a little flair to her porch display after her 2-year-old son's little carved pumpkin was stolen. She left this message, neatly written in black marker on a piece of cardboard, for the thief.

"To the person who stole my son's pumpkin: Thank you for the little life lesson," it began. "This will help teach him that people are mean for no reason and you have to just brush it off."

See, the four pumpkins that were sitting on Reina's porch were a replication of her family – daddy, mommy, toddler son and baby daughter. So Reina felt passionate enough, when her son's was swiped, to end the message expressing her anger:

"Because my son is 2-yrs-old and cannot read this sign, I will add: You are an a**hole."

And – no prank – the photo of the sad scene has since gone viral.

Tom Roussey of WJLA-TV, the Washington, D.C. area's Channel 7 news outlet, reported mom as saying, "I do hope they see the sign and I hope they feel bad about it." Little son Tommy, with his blond mop-top and cute green sports pj's, also expressed on TV that he feels "sad" about his pumpkin being stolen.

This latest holiday spin on public (neighborhood?) shaming has quite a few supporters.

Some commenters on an NPR blog article found the situation hilarious, chiming in with their own comedic remarks – like Class A., who said, "But … what about the thief's self-esteem? Now, he'll just have to go steal something else, you know, to make himself feel better." Sargon B. added, "If that pumpkin had a gun, this would not have happened."

Others even used the situation to own up to the ghosts of Halloweens past.

Clive B., testified, "I went through a pretty a**hole phase for a few years when I was young and smashed a few pumpkins around Halloween. One year, late on Halloween, a few friends and I encountered a house with a perfectly raked yard, one where they had put all of the leaves in the pumpkin trash bags and then creatively placed the pumpkin trash bags across the yard. My friends and I then ripped open each bag and evenly distributed all the leaves back over the entire yard. I'm not proud of myself for doing that. If you're reading this Mr. Carruthers … I'm sorry."

So it seems, this year, the Grinch isn't just stealing Christmas. What do you think of Becky Reina's tactic? What would you had done in her situation? Do you think the pumpkin thief got the message?

Put your putters to the turf in 2022 at one of these miniature golf courses in metro Detroit and Ann Arbor.
Read more
Education

A Macomb County expert shares insight on what summer school offers local students and when to know if it's the right choice for your child.
Read more
Advice

What should American children know about our country, and how can parents instill patriotism for kids at their home? Teachers share these 10 examples of patriotism.
Read more
Attractions

Michigan's Adventure opens May 27, 2022. Learn more about the park's attractions, ticket prices and everything you need to make the most of your trip.
Read more