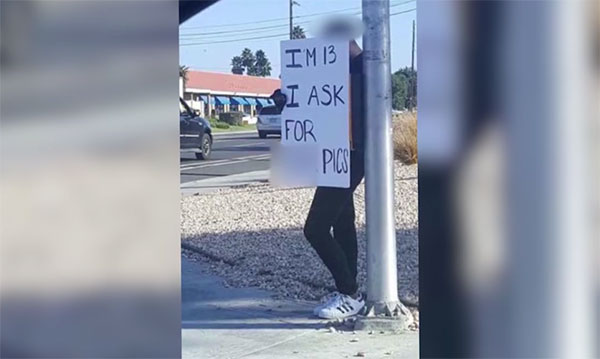 It’s safe to say that hormones and smartphones don’t always mix. At this very moment, there are teenagers sending explicit text messages or sexy snaps to a fellow teen. That’s right – they are sexting.

So, I wasn’t surprised to hear that a 13-year-old girl from Riverside, California was caught sexting, but I was shocked to find out how her mother punished her for the act.

The teen’s mom forced her to hold a sign, which reads “I’m 13 I Ask For D*** Pics,” The Stir reports. The teen had to then stand at a busy intersection so people passing by could see her and the sign.

“You can see tears running down her face,” Krista Wilson tells NBC Los Angeles. Wilson saw the teen’s picture posted on a Facebook group, which prompted her to drive to the intersection to check on the teen.

“Grown men were reading it and laughing,” she tells NBC Los Angeles.

And, it appears that mom was sitting in an SUV nearby as her daughter was publicly humiliated.

Wilson did end up calling the police, but the officer – who spoke to the teen’s mom – said her “actions did not constitute child abuse,” NBC Los Angeles adds.

As you can imagine, commenters have had mixed reactions to this mom’s public discipline.

On The Stir’s article, MM says, “Mom knows her kid. If the mom is reasonable and thinks this is appropriate, better for her to take action NOW, then deal with an out of control teen later. Not for strangers to decide, as to their opinions, they will NOT be there to mourn this girl or clean up her messes.”

On the other hand, commenter R says, “I don’t give a rat’s ass how well mom knows her kid. That was 100% abuse and horrific treatment of a young girl. That goes far beyond embarrassment. Now if she’s ever raped she will have an unfair reputation as a “slut” to be used against her and women with any kind of sexuality are treated like garbage in general. It’s sexism. A boy would NEVER be treated like that nor would a boy get the same perception. He’d be applauded for not being gay and for getting women’s pictures. NEVER use patriarchy and misogyny to punish a girl. Psychos who agree with this should not be entrusted with raising boys or girls.”

I agree with the second commenter. It’s an unfortunate truth, but females are often labeled as “sluts” for having the same sexual feelings and curiosities men have – and it’s sad. To have your mother be the person to publicly shame you for a mistake you made at 13-years-old is disgusting. Discipline your child privately. Take her phone away. Ground her. But don’t make her hold a sign on a street corner and have grown men laugh at her while she cries from embarrassment.

Shame on you, lady.

You might want to read my article on how to be a sex-positive parent. You need a lot of help in this area.

What do you think of publicly slut-shaming a teen for sexting? Tell us in comments.