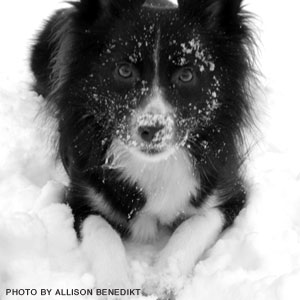 There are photos that depict the two of us happily sharing a bone, me in a diaper and her submissively lying on the floor knowing that I was the new apple of daddy's eye and ruler of the roost. It wasn't a chore to love that dog dearly until her final day.

Apparently, not everyone can appreciate an animal after popping out a few kids. Just ask Allison Benedikt, a mom of three. Benedikt recently wrote an article for Slate.com condemning her decision to let a border collie mix into her home before having children.

She claims her love for her pet Velvel just isn't the same after three pregnancies. Before children, life revolved around little Velvel. She and her husband took him on car rides, let him share the bed and even cooked homemade dog food for the pooch.

But after giving birth, things changed.

And she justifies her lack of affection, saying that other people in her life feel the same way about their own poor pets.

"A friend of mine once told me that before he had a kid, he would have run into a burning building to save his cats. Now that he has a kid, he would happily drown the cats in the bathtub if it would help his son take a longer nap. Here is how I feel about that statement: Velvel, avoid the bathroom."

Including the kitties as part of the family is perfectly normal. Having visions of drowning them in the bathtub to help your children sleep is just sick.

Commenters searched for a reason for Benedikt's lack of sensitivity. Ideas include choosing the wrong breed, being overwhelmed with responsibility, selfishness, poor decision-making and lack of planning. Perhaps, a heart that only has room for three beings?

Their guess is as good as mine.

Goldie1 speculated on the source of Benedikt's contempt by commenting, "We managed to have dogs and include them in our lives once the babies came along. Both kids, now young adults, grew up with a great respect for dogs and their importance in the family. The sad fact of the matter is right in our faces. That cute little puppy grows into a dog and now it becomes a burden because priorities have changed."

"Nobody wants an old dog, especially one with liver problems as the article suggested," commented Grim.

Positive comments on the Slate article are nearly impossible to find. Most readers could see how having three kids plus a dog would be extremely difficult, but the vote was unanimous: Benedikt made an irresponsible decision when she took in an animal – plain and simple.

Maybe the reason this woman couldn't rekindle her old feelings for poor Velvel was because she treated her dog as a child. Maybe when she had actual children, she realized she had been trying to plug a hole that could only be filled with other Homo sapiens? Doting and spoiling your pooch is all fine and good, but personifying an animal doesn't make it a human being.

Not all couples can manage the huge responsibility of a dog and a child. However, part of being a responsible pet owner is thinking of the long-term care you'll be able to provide. Obviously, the Benedikt family failed to do so. The author wrapped up her article with one last jab at her once beloved pet and a little advice that may apply to some couples, but certainly not to the majority.

"I cannot in good conscience tell you every thing I think on the subject of my dog Velvel. Yes, there's more. I can only say this: To all you young couples, thinking, 'We should get a dog!' 'I love you, let's get a dog!' 'We're not ready for kids, but what about a dog?!'—don't get a dog. Or, if you do get a dog, don't have kids.'"

So what sets my family apart from hers? How could my parents possibly manage to love me and our dog?

Well, I suppose there's a simple answer. They are responsible human beings who thought things through before having me. But even if they hadn't, I fail to see how loving a child could make loving an animal more difficult and I would hope most pet owners think along the same lines.

The verdict: Every family is different and owning an animal is a giant responsibility. Of course, kids will (and should) take priority over the family pet, no matter how long you've had Fluffy the cat. If children are in the cards for you, it is your duty to make an informed decision before you purchase, adopt or rescue any critter.