Mom Shows Up Uninvited to Daughter's Wedding, Causes Scene and Gets Arrested 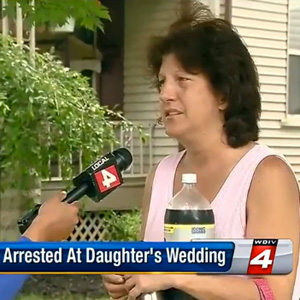 Every little girl dreams of her wedding day and how perfect it will be. Most of the time, that fantasy involves special moments between daughters and mothers as they plan and prepare for that day. But for one local bride, that wedding dream was not a reality. In fact, her uninvited mother crashed the wedding – and drama ensued.

When a 54-year-old Trenton, Mich. mother was not invited to her daughter's wedding, she took matters into her own hands.

According to The News-Herald, around 4 p.m. on July 5, 2013, mother of the bride, Debra Becker, showed up to Silver Shores Banquet Center in Wyandotte.

"The bridesmaids told me to leave my daughter's wedding. They were screaming and yelling at me," Becker told WDIV Detroit.

But things didn't stop there. Becker upped the ante once she hit the parking lot. According to witnesses, Becker got into her 1998 Oldsmobile and rammed into the rear end of her daughter's Pontiac. Then, she put her car in reverse and backed into a Ford Explorer.

Becker left the scene of the accident, but police caught up with the woman in Southgate. Police officers requested a preliminary sobriety test – but Becker refused to take it. Officers found an open bottle of liquor in her car, The News-Herald reports.

Becker was arrested for operating while intoxicated, having open intoxicants and leaving the scene of an accident. Becker had her blood drawn at Henry Ford Wyandotte Hospital after police obtained a warrant. Police are waiting for the blood tests results and no charges have yet been filed.

"I just tried to be at my daughter's wedding. That's all it was," Becker told WDIV Detroit.

"I was hurt so very bad. My daughter broke my heart," she said about being excluded from the guest list.

While the mom seemed upset during her interview, commenters in the blogosphere weren’t buying it.

Click on Detroit commenter liberalnomore said, "Mom was mad because she heard it was open bar and she had already spend her welfare check."

Dcross7 said, "Your daughter broke your heart? Moron…You broke hers…"

Super Duper Man said, "Hopefully, mom is ready to admit she has a problem and gets the help she needs."

It's clear that there are underlying issues that the pair needs to deal with – especially for a bride to make such a difficult decision to exclude her mother from her wedding day.

As for the bride, she hasn't publicly responded to her mother's display, but WDIV reports that she attempted to continue on with her special day – despite the bump in the road.