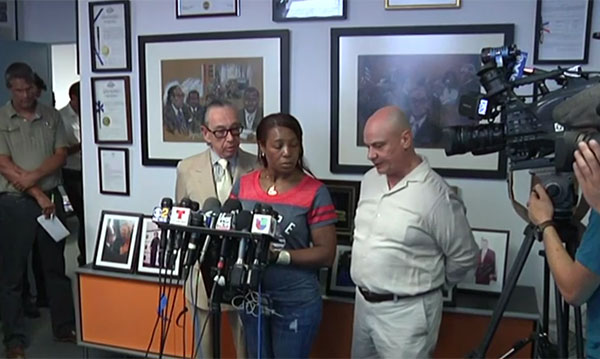 Many major airlines allow little ones as young as 5 years old to travel alone on nonstop flights. Usually, parents can rest easy knowing they will be a part of some sort of unaccompanied minor program.

But sometimes, mistakes happen, which is why one upset mother, Maribel Martinez, is suing JetBlue Airways. Back in August, her 5-year-old son Andy, who was supposed to land at New York’s John F. Kennedy International Airport, ended up landing at Logan Airport in Boston when he was mixed up with another child, the Independent reports.

Now, Martinez has decided to go after JetBlue for what happened.

The mix-up was discovered when the other boy, who ended up in New York, was brought to Martinez, while her son Andy was taken to another woman in Boston. According to the news reports, both boys were flying from the Dominican Republic – and the New York Daily News notes the other boy had Andy’s passport.

JetBlue told the New York Times in early September they’re looking into the incident, and the statement they sent the newspaper reads: “Upon learning of the error, our teams in J.F.K. and Boston immediately took steps to assist the children in reaching their correct destinations. While the children were always under the care and supervision of JetBlue crew members, we realize this situation was distressing for the families.”

JetBlue did try to make it better by giving Martinez $475 for the ticket and $2,100 for future travel, the New York Times reports – but that wasn’t enough.

It must take a lot of guts to allow your child to fly alone. I know I would personally have tons of anxiety about that entire situation. I cannot even imagine what would happen if the wrong child got off the airplane and yours was nowhere to be found.

Commenters here and there have bashed the mom for letting her child travel alone, but I think that’s unfair. Hasn’t she been through enough? These unaccompanied minor programs specify kids as young as 5 can travel alone. While it’s a personal decision whether a parent is comfortable with that, one could assume since the airline has a program in place for these exact situations, children would safely arrive at their intended destination.

While I’m sure many, many kids fly JetBlue alone and make it to the proper airports, these two did not. Knowing they have unaccompanied minors aboard means they should do everything in their power to make sure it goes smoothly – for the safety of the kids and the peace-of-mind of their families.

What are your thoughts? Tell us in the comments!