Mom Swimsuit Video Nails the Pain of It All, Goes Viral 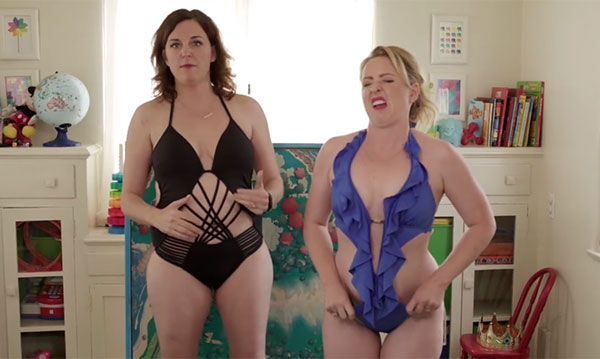 I can’t think of any mom that particularly likes to put on a skimpy bathing suit and go to the beach, especially nowadays when swimsuits are so revealing and have such awkward cuts and designs.

The series, which the pair started just over a year ago, provides a review-like analysis of issues that moms deal with on a regular basis.

With 68 total videos, an average of nearly 1 million views a pop and over 16 million on this one so far, this dynamic duo is hipper than your average mother. But, at the same time, they’re totally relatable.

In under five minutes, the moms discuss a variety of issues they have with today’s women’s swimsuits, including how they make their bodies look, how men’s swimwear is so much more versatile – and the struggle to do their best to stay positive about their bodies to be good role models for their kids.

“Nobody thinks that they look perfect, ever,” says Smedley in the video. “Let’s just all go to the beach.”

“And have a good time,” adds Hensley.

The two then begin trying on different types of swimsuits, including bikinis, high-waisted bottoms and crazy cutout one pieces.

“I do not feel confident in a swimming suit at all, but I’m not going to let that get in the way of me building a moat,” quips Hensley.

Some of the designs are straight-up ridiculous. Others look more like lingerie, while others still just seemed to be made to be unflattering. And a few seem to have been tailor-made for top models with perfect bodies only.

While strutting around in a black one-piece that appeared to have a spider-web cutout at belly level, Hensley opines, “Isn’t the whole idea to keep everything in? It looks like you’re pressing something against a tennis racket!”

Smedley puts it this way: “Nothing is going to make you feel worse about your body than the swimsuits they make. I’m going to look like I love cheese, no matter what – because I love cheese.”

The ladies describe how tough it is to move around with ease in the suits, to play or to simply grab drinks from the cooler – doing some sidesplitting pantomimes to make their point.

Hensley also says she couldn’t seriously discipline her kids while wearing one of the ridiculous suits.

By the end, both moms are dressed in their normal beach attire: a cap, some flow-y pants and a tank top for Hensley – and a sunhat, cover-up and a big jar of pretzels for Smedley – and head for the beach to have fun and not worry about what they look like.

How do you feel about some of the swimsuit fashions out there for women? What’s your choice for the beach? Tell us in the comments!