One mom proved that she's still got it when she posed for pics with members of the football team at her kid’s college orientation to win tuition money. 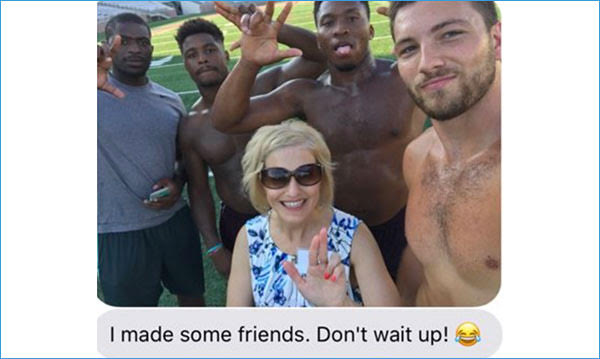 Moms. Can’t live with them and you definitely can’t live without ’em, amirite? If they’re not embarrassing their teens by loving on them in public then they’re making some seriously hilarious social faux pas.

But hey, they earned these rights when they pushed you out their nether regions and, let’s be honest, these “embarrassing moments” are typically out of love. Especially when mom goes out on a limb to help you pay for college.

Take Avery Leilani’s mom, Danielle Clay. When she dropped her daughter off at Texas State University for freshmen orientation, she saw that the school was offering a contest for parents. And the prize was tuition money.

Just like any mom would, and unbeknownst to Avery, she jumped on the chance to ease the financial burdens of higher education for her daughter – and struck a pose with members of the football team, Huffington Post reports.

Unlike the other moms, though, she walked right up to the buff college hunks and asked for selfies.

“A lot of parents were trying to hide the fact that they were taking selfies with the football players in the background, but my mom went straight up to the (guys) and asked for the pics,” Leilani is quoted as saying.

Her mom’s boldness, and the players’ willingness to participate in the photo shoot, resulted in a hilarious text message to her unsuspecting daughter that included the photos and a message that read, “I made some friends. Don’t wait up.”

To that her daughter responded, “LMAO” and “mom you cougar.”

Unfortunately, according to Avery’s Twitter feed, mom did not win the tuition money, but we’re super glad that Avery took her mom’s shenanigans in good spirit – and we’re even more proud of Clay for stepping out of the box and taking a harmless, good-spirited risk for her kids.

Too many times moms are judged based on what they should or shouldn’t do simply because they’re moms. Sometimes, people forget that moms are people, too, and that they can have fun, make silly mistakes and be goofy – I promise the world won’t end if they do.

Has your mom ever done something super silly or embarrassing to you? Tell us about it in the comments and let us know what you think of this mom’s antics, too.