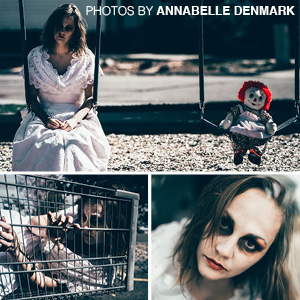 If you think the doll in the movie Annabelle is creepy, wait until you see her all grown up.

On any given day, Colorado housewife and mother Amanda Smith can be seen around the small town of Erie, Colorado with her kids. But when professional photographer Annabelle Denmark was hit with some inspiration, Smith was transformed from stay-at-home wife and mom to demonic doll, according to Channel 9 News.

The horror movie Annabelle follows the supposed true story of a doll possessed by a demon that terrorized a family for several months before finding its home in the Warren Occult Museum in Connecticut.

Though Denmark usually focuses her work on fine art and portraits, the release of this movie sparked inspiration that led her to pursue this new style of photography.

During the shoot, Denmark took her life-sized dolly, complete with a vintage wedding dress, blank staring eyes and matted hair, to some of Erie's local hotspots. The doll can be seen everywhere – including the local Wal-Mart, Starbucks and even a church. While Smith likely doesn't have demonic powers and probably won't terrorize your family, her photos do have a sort of haunting, but delicate feel.

"We were actually looking to find something beautiful within the creepy and the scary," makeup artist Andi Johnson tells Colorado's Channel 9 News.

The intricate and ethereal beauty of these photos, however, is lost on some who think that time could have been better spent.

One Channel 9 commenter, Ann Pirie, says, "Just how bored can people be that they have time to think up stuff like this. Go to a hospital, soup kitchen or some other place that helps those in need."

In response, Denmark told Pirie that it is empowering to work and create with suburban moms.

"There are many ways to help the community, art is one of them. We do this out of sheer passion, not boredom," she writes.

Most, however, are calling the photos creative and beautiful works of art.

As for Smith, she has no intention of seeing the movie that inspired the photos, but she loves the art she played a part in creating.

"I thought they were amazing," Smith tells Channel 9. "I was sitting at work when I saw the one with an enlarged head and it freaked me out, and I had to text [Denmark] saying 'that was amazing!'"