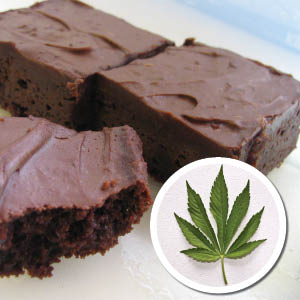 Living up to its reputation, marijuana can make people do some pretty stupid, um, stuff. Sometimes this includes parents letting their children get their hands on their stashes, whether deliberately or accidentally. Either way, the irresponsibility can be pretty jaw-dropping.

So go the strange stories of two moms in today's Oh Mother – which, indeed, center on weed and poor decision-making skills. There's the elementary school boy who divvies up his mom's laced brownies to his mates – and a truly bizarre case from New Zealand involving some potent breast milk.

We first travel to Maine, where a local woman was arrested after her child brought pot brownies to school and knowingly gave them to other students.

Bringing a whole new meaning to the phrase "trading lunches," several students at Mountain View Elementary School, located in the town of Sullivan, were suspended in connection to the magic snacks.

As reported by the Sun Journal, the mother, Amanda Hiser, 32, was charged with aggravated trafficking of a scheduled drug.

It's unknown whether the mother deliberately gave her child the goodies or if the kids snatched them without her consent. Either way, mom's ill-advised special ingredient has her in some serious hot water.

Another story comes from Down Under, where a New Zealand mother has been charged after exposing her baby to marijuana. And nope: This small fry (har) wasn't exposed to second-hand smoke or even given pot brownies.

All quips aside: Mum is being accused of transmitting cannabis to her child through her breast milk.

After she and her partner were arrested for drug charges, police booked the woman for child abuse – after the cops discovered she'd been breast-feeding the baby.

"Child abuse is family violence in these circumstances, and it is clear this baby and its mother needed help," said senior sergeant Andrew McDonald in an interview with the BBC.

The woman pleaded guilty, but according to law experts, it is likely she could have fought the case and won.

"It would be necessary for the prosecution to prove that the mother knew she had cannabis in her system, and that she intended to administer it to the baby," said Warren Brookbanks, a law professor at the University of Auckland, in the article.

The effects of marijuana and THC through breast milk are controversial and still being researched, but the topic is still causing a stir.

And hey: While feeding an infant THC-tainted breast milk is possibly harmful to the baby, getting busted for toking up is undoubtedly not in the best interest of the child. Right?