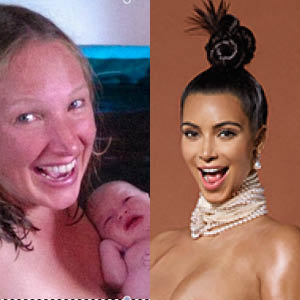 At the same time Kim Kardashian's derriere was taking the Internet by storm, one mom found out the hard way that not all butts are created equal when her birth photo was removed from a positive birthing Facebook page, citing the community standard regarding nudity.

Milli Hill founded the positive birth movement, a group focused on spreading positivity about childbirth back in 2012. So, when she gave birth to her newest daughter, she posted an image of her backside during her water birth to Facebook.

Right around the same time, Kim Kardashian (Note: Don't click this link at work or in front of the kids; there are nude shots) was showing off her body with a fully nude photo shoot for Paper Magazine. Soon after the photos were released, her booty was all over the Internet.

One of these photos was taken down – and you can bet your bottom dollar that it wasn't the famous rear end.

Hill wasn't happy when Facebook removed her photo, so she set out to spread her message. She told The Stir that childbirth is hidden in our culture and that photos like hers should be shared online to help other women become more confident about childbirth.

"They show women catching their own babies, giving birth without intervention, upright and strong," Hill told The Stir.

Some people, however, don't agree with her approach to spreading this positivity with such graphic photos.

"Yeah, I wouldn't want to see that picture. I don't even want to see the Kim pictures but unfortunately they are there," Elizabeth Potter-Proffitt commented on the article by The Stir. "In all honesty. I rather see Kim's ass than a butt hole at my face."

Others appreciated the beauty of the moment, but insisted that certain moments be kept within the family.

Though Hill's photo may have been a bit too much for some people, it still can't be ignored that there have been multiple instances in which social media sites have removed photos of perfectly natural photos including pregnancy portraits and breastfeeding images due to nudity.

What is even more alarming is the way that some people respond to pictures of a baby just getting lunch. Actress Alyssa Milano was on the receiving end of some pretty nasty comments after posting a pic of her daughter Elizabella as she breastfed.

In response, Milano pointed out the hypocrisy in a tweet.

"Wait! I don't get it. No disrespect to Kim but … people are offended by my breastfeeding selfies & are fine with her (amazing) booty cover," she tweeted.

Whether it's childbirth or breastfeeding, it seems that Internet users aren't as comfortable with nudity unless it's sexual or for art purposes.

So where do you stand on this issue?