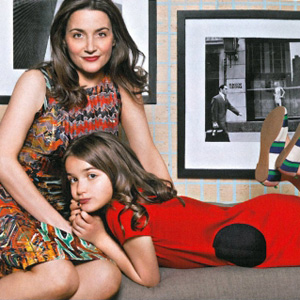 A Tiger Mom with an overweight kid walks into a fashion magazine. The result – a Vogue article that's drawn harsh backlash – is not so funny.

In Vogue's Shape 2012 April issue, Dara-Lynn Weiss, a New York mom of two, details her year-long battle to get her daughter, Bea, to drop weight – after docs declared the child obese at 4 feet 4 inches and 93 pounds (though it seems the last straw was when a boy in school called Bea "fat").

Weiss' blunt account of her hard-nosed, calorie-counting tactics with her 7-year-old – which also exposes mom's own food issues – has touched a raw nerves.

Ditto for her, the author claims. "I cringe when I recall the many times I had it out with Bea over a snack given to her by a friend's parent or caregiver," she writes in her essay, called "Weight Watcher." "Rather than direct my irritation at the grown-up, I often derided Bea for not refusing the inappropriate snack."

It's scarcely the only wince-worthy scene. There's "reproachful" dinner depravations (after Bea had an 800-calorie French Heritage Day at school), brash words with a Starbucks barista (when he couldn't say how many calories were in a kids' hot chocolate, Weiss "dramatically grabbed the drink out of my daughter's hands, poured it into the garbage, and stormed out") and "heated public debate" with other parents when she wouldn't let Bea have both cake and cookies at a party.

She even owns up to declarations like, "Bea, you have to stop eating crap like that; you're getting too heavy."

But that's all underscored Weiss' by own weight obsession. With painful honesty, the mom, descried as a socialite and part-time TV and web producer, recalls Weight Watchers points, juice fasts, Atkins and even dangerous appetite suppressant fen-phen ("even after it was found to cause heart-valve defects and pulmonary hypertension," she admits).

"Who was I," mom asks, "to teach a little girl how to maintain a healthy weight and body image?"

Flabbergasted bloggers had answers. "One of the most f–ked up, selfish women to ever grace the magazine's pages," is how Katie J.M. Baker put it in a widely read post on pro-female blog Jezebel. An irate Baker even reaches out to Dr. Joanna Dolgoff, the doc cited in the article who helped the Weiss family – at least initially – with her Red Light Green Light Eat Right program, which emphasizes all-foods-in -moderation in a child-run program.

"The truth is that making a child feel bad only causes problems," said Dolgoff, who wasn't thrilled about the story, to Jezebel. "It's not going to help with weight loss, and it's definitely not going to help the child emotionally."

Strangely enough, Weiss acknowledges that in the last few lines of her column. "Only time will tell whether my early intervention saved her from a life of preoccupation with her weight, or drove her to it."

In the meantime, it's yielded two definite results. A mommy-daughter Vogue photo shoot, featuring a slender Bea in a couple of her "pretty new dresses." And, for mom, an Amy Chau moment. Yep: Weiss got a book deal with Random House (the working title is The Heavy, and the memoir's being touted as "an experience that epitomizes the modern parenting 'damned if you do/damned if you don't' predicament").

For anyone wondering what poor little Bea thinks of all this, mom offers this closing insight: "That's still me. I'm not a different person just because I lost 16 pounds," her daughter reportedly said with tears in her eyes.

Granted, Bea also started doing (and loving) karate and swimming, mom reports, which may at least help with a positive outlook on physical activity down the road. But the food stuff? And what of the, y'know, potential public humiliation – both in print and lingering online for years to come?

In New York Magazine, Mom de Guere – a fellow mother of a 7-year-old who wouldn't even give her real name for feeling "so fiercely protective of my children's future physical and mental well-being" – offered this ray of light:

"Years from now," she writes, "when Bea is in therapy, she won't have to waste those early sessions explaining herself, because she'll just be able to hand over that article and say, 'SEE WHAT I HAD TO DEAL WITH?'"