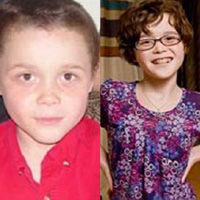 Adolescence is a confusing time for kids. But not like you'd expect for Tommy Lobel – or Tammy, as the 11-year-old is known at his California school. See, from a tender age, this child firmly preferred Wonder Woman, glitter, dresses and dolls. Since 3, he's declared to his parents, "I'm a girl." And, by 7, he was diagnosed with gender identity disorder.

That journey led Tammy's moms, Pauline Moreno and Debra Lobel, to start their child on hormone blockers – essentially pushing the pause button on puberty to give their transgender child more time to explore his identity as a girl.

"When she's ready, she'll be able to decide which way she's going to go through puberty," Moreno explained in a candid CNN video interview, which ran in September. "She'll have either female hormones, or she'll stop the hormone blockers and become a man."

Added Lobel, "(It) buys her time to mature – and time for us to kind of catch up with her. Because she's running this fast."

Boy, is that the truth. And web commentary's kept pace on a topic that's grabbed plenty of controversy in the barely-decade it's been an option for tweens and teens in the 'States. This latest case pops for a few reasons.

Age is one. Basically, Tammy will get monthly injections that block all the testosterone business – until she's as old as 16, according to The Endocrine Society. In that time, it'll prevent the sprouting of facial hair, deepening of the voice and the like. At any point, she can stop – and boy puberty will pick back up, the society notes.

That's key, says Eli Coleman, who's been involved with the World Professional Association for Transgender Health, because "There are a lot of children who have gender nonconformity," he told CNN. "They will simply grow out of that. Many of them later on identify as gay or lesbian."

Other health side effects are typically cited as minimal. Still, some question that start age. "You make the decision on when to start hormone blockers based on the puberty of the child," asserts Dr. Walter Meyer, a pediatric endocrinologist in Texas, in the CNN clip. "Very few boys undergo puberty at age 11. Most start at age 12, 13, 14."

But others, like Norman Spack, who pioneered the practice at Children's Hospital in Boston around 2007, point to ages 10-13. Once puberty kicks in, it's trickier to reserve those changes – if a child decides to change genders later in life.

"We can make it possible that they can fit in in the way they want to. It is really quite amazing," he said in a 2008 NPR interview.

The one significant hiccup? "Taking testosterone or estrogen immediately after blocking puberty will make a teenage patient sterile," the NPR article notes. (Note: The hormone blockers themselves don't cause sterility.)

If all that wasn't sticky enough, Tammy's caretakers have been taking heat – not just from bloggers, Moreno told CNN, but even friends and family.

"I'm a lesbian. My partner is a lesbian," she said (they adopted Tammy at age 2). "That suddenly falls into the fold: 'Oh, you want her to be part of the lifestyle you guys live.'" Not so, Moreno said, adding, "The fact that she's transgender gives her a harder road ahead, an absolute harder road." (The comments at News.com.au give a pretty decent sense of the debate, if you're curious – or check out this article to read about one heterosexual couple's strikingly similar journey.)

But what seems to be hitting the deepest nerve – and evoking backlash like "disgusting," "sickening" "wrong, wrong, wrong" – is the ethical edge. Meddling with nature and that.

In Tammy's moms' views, anyway, this choice is natural for their child – who was never as rowdy or sporty as his two older brothers, CNN reported, and once said he wanted to cut off his penis, prompting professional help.

"As soon as we let him put on a dress," Moreno told CNN, "his personality changed from a very sad kid who sat still, didn't do much of anything, to a very happy little girl who was thrilled to be alive."

From wardrobe shifts to pronoun changes, Tammy was always adamant, they say – even despite having a speech impediment. And that sort of "persistent and consistent cross sex identity from childhood" is a key factor in weighing hormone therapy, the Center of Excellence for Transgender Health notes. The American Psychological Association cautions, at least, "It is not helpful to force the (transgender) child to act in a more gender-conforming way."

That's clearly the road these moms are traveling. "We have to allow Tammy to lead the way," Moreno told CNN, "because we're not transgender."