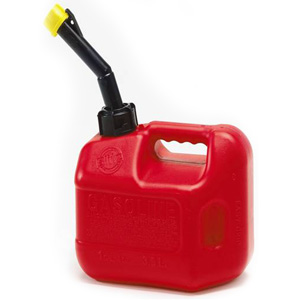 One quick Google search for at-home remedies to treat head lice and you'll encounter everything from Listerine to mayonnaise. What's missing from the list of top contenders? Gasoline.

But, that didn't stop a mother in Oklahoma from using gasoline to treat her 5-year-old daughter's case of head lice. Shana Suggs, 25, poured gas on her kid's head and got terrible results when a nearby space heater ignited the gasoline and caught her and her child on fire.

Suggs and her boyfriend were able to extinguish the flames, but not before the little girl suffered second- and third-degree burns on 60 percent of her body.

The couple had four other kids at their home when the incident occurred. They dropped them off to relatives – then took the young girl to the hospital. Her daughter is still recovering while Suggs faces felony charges of child abuse by injury.

An article from The Stir begs the question: was the whole ordeal plus public shaming enough to teach this mom a lesson, or should she be slapped with a felony and face years in prison?

So what possessed this present-day mother to use such a dangerous home remedy? The Stir article also notes that gasoline is actually a remedy used since the "olden days." And while it isn't one of the top items that pops up during a Google search, that doesn't mean that Suggs hadn't heard about it from a friend or relative.

Her reasons, at this point, are pure speculation. While the mom has yet to comment, the blogosphere is buzzing.

Commenter happinessforyou says, "They make products that help get rid of lice. And no, it is not gasoline. She lit her child on fire, maybe not on purpose, but she did. And then she drove the other kids to someone's house and THEN they took her to the hospital. How long did that take? Why wouldn't you call an ambulance? Maybe not felony abuse but dumb-assery for sure!"

Other commenters suggest parenting classes are needed, while some speculate that there may be more to this story.

What do you think? Should this mom be charged, or has she suffered enough?