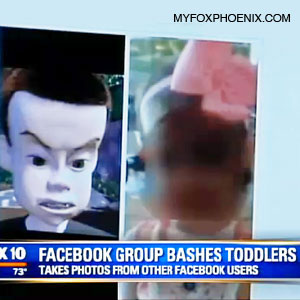 It's no secret that kids can be cruel to other children. Luckily, most children grow out of it once they are taught wrong from right. But then you have that percentage of folks that never really grows up. Case in point: A group of women, mostly moms, used a Facebook group that was designed to sell and trade toddlers' clothing to "toddler bash."

The private group, which has since been taken down, became the spot where mothers could come together, relax and post pictures of toddlers they felt weren't physically appealing. What's worse, some of those tikes are disabled or have genetic disorders like Down syndrome. That's pretty low, right?

Members of the Facebook group would pull photos from other users' pages – without their consent – then post them to the group all for bashing. The photos received dozens of comments – including some about how hideous the kids were. One child was even compared to the character Sid from Toy Story.

What's worse is that the moms appeared to enjoy bashing the tykes – much like one user who wrote, "An ugly baby thread. I have died and gone to heaven … why can't you guys live near me so we can do this over cocktails?"

The outrage over this private page comes at a time when Facebook is attempting to decrease cyberbullying by introducing its bullying prevention page. These moms, it appears, clearly missed the memo.

When one mother discovered that her daughter, who was born premature, was listed on the group's page, she posted an image of her daughter next to one of her newborn photos where she was hooked up to tubes. She then wrote, "This is MY DAUGHTER who was made fun of because she is delayed … so funny huh?!?! Sick…"

Opinions on the web

The blogosphere is buzzing with mixed reactions to the now defunct Facebook group. Some commenters believe the women in the group are bad people.

"The fact is that there are ugly, disgusting, and pathetic people everywhere," commenter Ben Thompson says. "Every child is beautiful, no child should ever feel ugly or unwanted, the only thing these despicable women are doing is setting the example that it's ok to bully, and make fun of others…"

On TheBlaze.com,YankeeWest commented, "Apparently these "moms" didn't have moms who valued them enough to raise them with character and integrity never mind compassion."

Others disagree. They believe the moms didn't do anything wrong and that it's not harassment or bullying because the group was private. Also on TheBlaze.com, Gritchie comments, "Oh, come on! This is funny. I wish I'd heard about it before all the bluenoses got involved."

Furthermore, some readers believe that the First Amendment protects the participants of this page. But commenter KAB on the DailyMail disagrees: "The whole premise of freedom of speech is to allow people to not fear when they express their political, religious and social beliefs. It is not, absolutely not an excuse for any old simpleton to express an opinion that has no intelligent thought behind it and only serves hurt others."

It's not anyone's place to comment on the physical appearance of a child. While some people, most outside of motherhood, think newborns look like aliens, mothers just see their precious creation. Words cannot express how I would feel if someone stole my child's photo and used her for taunting or amusement.

Are these women wrong for bashing these toddlers or can it be justified with the First Amendment? How would you feel if these toddlers were your children?