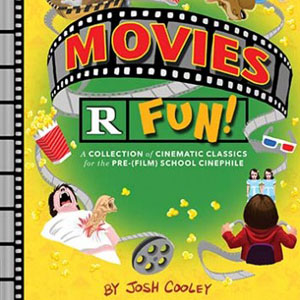 Over here at Metro Parent, we get the occasional miffed letter or Facebook note from a reader chastising us for using swears or covering naughty stuff (such as Michigan mom Jasinda Wilder, who writes steamy novels – with her hubby). We truly try to be tasteful, but also remind our dear audience that we are, indeed, a pub for parents – creatures who are known for the occasional curse or sexy deed – and not wee page-turners.

In that spirit, we’re admittedly a bit nerdy for “kids” books meant for adults – and are pleased as punch that Josh Cooley’s Movies R Run! A Collection of Cinematic Classics for Pre-(Film) School Cinephile is hitting digital and store bookshelves today. This fresh parody title by the ever-zany Chronicle Books publisher joins its Lil’ Inappropriate Books line. And, while it totally parades as a colorful 48-page children’s book, you probably don’t want to read this one to the kids at bedtime (although this hilarious promotional video might sway you otherwise).

The premise is super simple – you may have seen it making the rounds on social media. It’s drawings of iconic moments from classic R-rated movies with a snippet of dialogue from the scene below it, picture-book style. But the best part? Cooley, who’s responsible for all the illustrations, is a story supervisor at Pixar Animation Studios, who’s worked on Up, Ratatouille and Cars. This talented California dude offers a twisted slice of fun for parents. Oh, and yes – he also has two kids, Lola and Oscar. If you ask us, he sounds like a pretty, well, bada*s father.

Flip through a few pages from Cooley’s new book in our Oh Mother photo gallery (we tried to choose tastefully – more or less). Enjoy!

Cooley’s take on Stanley Kubrick’s 1980 spin on Stephen King’s horror novel – which is basically about a family winter vacation that goes all kinds of wrong. This creepy scene holds up under cute cartoon treatment.

Don’t be afraid to go in the water, kids: Just take the calm advice of your friendly Martha’s Vineyard police chief. This drawing turns the 1975 shark slasher flick into a slightly sweeter story.

Here’s the scariest shape-shifting liquid-metal assassin robot of silver-screen history, who gave Schwarzenegger a run for his terminator tush in 1991.

“Kane, what is it? What is wrong?” asked Ripley.
“AAAAHHHHHhhhhhh!” answered Kane.

It’s the freaky alien birth moment that Mel Brooks’ Spaceballs did a fine job lightening up in 1987. Cooley’s version also got us to crack a grin over the grim sci-fi horror scene.

“Would you like me to seduce you?” asked Mrs. Robinson. “Is that what you are trying to tell me?”

Ben Braddock seems younger than ever as Mrs. R delivers her cool-cat line, wouldn’t you say? This classic dates back to 1967.

Swear alert! But if you’ve seen this 1998 cult hit, you know it’s probably one of the tamer ones John Goodman delivers as Walter Sobchak. Abide.

Another Kubrick offering. We couldn’t resist. It’s like the ultimate smartphone meltdown, only back in 1968.

What sound does the hair-raising violin make, kids? Master of suspense Alfred Hitchcock and master or animation Josh Cooley make a dynamic duo on this smile
-cracker.

And finally: Although we certainly don’t advocate violence, we must admit – even Brad Pitt’s character from this 1999 movie doesn’t look nearly as aggressive with the picture-book treatment. And besides, parents know the truth: Kids are the real masters of Project Mayhem.