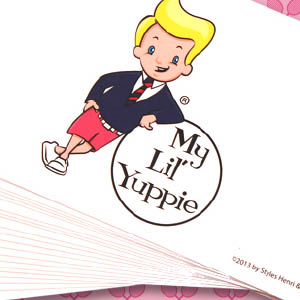 Does your child know what a chauffer looks like? Time to teach her! With the My Lil' Yuppie flash card game, your kid can learn about the important things in life. Now, when she sees a lowly man in a cap and suit opening the door for the person who pays him, she'll be able to identify him as an inferior human being. Other flash card words include nanny, stock portfolio, yacht, private jet and beach house.

The nanny card is priceless: On the picture side, a blond woman with a nice rack and a healthy butt pushes a stroller. I imagine yuppie parents will quiz their children by flipping the cards while asking questions like:

"Who takes you on walks?"

"Who tucks you in at night?"

"Who's having an affair with daddy?"

It's the perfect preparation of what's to come. Every parent needs cards like this to teach their kids about the imperative items that keep WASPs and yuppies afloat, like luxury goods and caviar. I suggest a new name: Snob in a Box: Everything You Need to Teach Your Kid the Art of Pretension.

As a gag-gift for a baby shower, this card game would be hilarious; a friend pointing out to another the pitfalls of overindulgence – one of those "yeah-yeah we get the point" type of jokes. Perfect for the soon-to-be parents who've already gotten their kid a crystal-encrusted pacifier. I can even picture someone on the opposite end of the spectrum seeing this as an opportunity to present their not-so-affluent friend with a little hope of moving up in the world, thanks to a kid who's well-versed in the vocab of the super-rich. What concerns me is the notion that not all parents will take this game as a joke.

The term "yuppie" once meant (y)oung (u)rban (p)rofessional + (pie), but it now denotes a manner of immodesty. These flash cards are not the root of all evil, but they do perpetuate the separation of classes – and the idea that what you buy makes you special or elite. It's not wrong to teach your kids about your lifestyle, what you like, the things you do. But it's hard not to wonder if setting them up with this arsenal of words at a young age might skew expectations – or attitudes – down the road.

Judgment aside? These cards are a riot. Just pray that whoever buys them knows they're a trendy joke, far from reality.