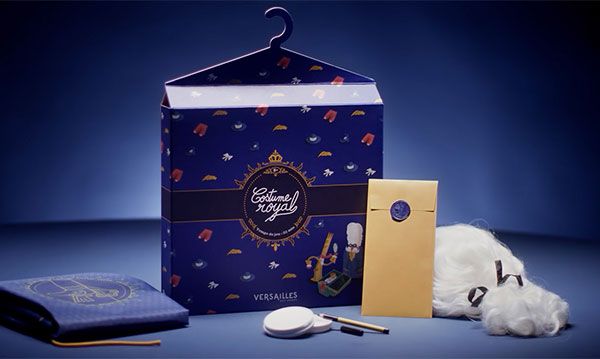 King Louis XIV was a great big hoe. OK, OK, maybe “hoe” is a strong word, but Louis the Great certainly did like a good boink-fest.

King Louis became the King of France at just 4 years old, in 1642. At 14, just 10 years after gaining the throne, he lost his virginity (in his defense, she seduced him). He hung around with this mistress, 38 (ish)-year-old Baroness de Beauvais, better known as one-eye Catherine, for two years. Then moved on to a gardener at age 20, then his wife at 21, then a whole bunch of mistresses after, and well, you get the picture.

So, how do you make a show for grown-ups that grown-ups with kids can’t actually watch, at least not until the wee hours of the morning? Why, you make a line of kids’ toys to distract the kids, of course.

“Versailles for Kids,” launched just in time for the show’s second season, on March 27, and offers a full line of toys and a mobile app that will keep your little tyke distracted as you watch 52 minutes of drama, history and coitus.

The line offers fun activities for kids, which include things like a king costume kit and a kit to make a custom royal seal; plus chances to win prizes with each episode – like a gardening kit with episode one and board game with episode two, and a smartphone app that brings Versailles to life, Super Mario style, sans intercourse.

So far, Adweek reports that more than nine million people engaged in the campaign, with more than 4,000 toys being won, per BETC.

I mean, it’s no secret that the French have a very sensual history, and aren’t afraid of nakedness, (take note, breastfeeding shamers). Nevertheless, there’s a real difference between being comfortable with human anatomy and an in-your-face romp in the hay.

Kids are perceptive and can be easily distracted. What happens when 6-year-old junior gets bored with stamping his royal seal, and looks up when Louis and his lady decide to play “cowboy,” or little Sally gets really excited and runs in to show you what she made?

I mean, there’s only so many times you can tell junior that the two are “wrestling” or explain to Sally that’ it’s “just a lying down hug” before your kid becomes hip to your game.

While it’s a good idea to keep an open dialogue with your kids when it comes to anatomy and sex, “the talk” tends to be awkward enough for parents and kids without “happy noises” playing in the background. But hey, if your kiddo is the creative type and gets totally immersed in crafts, it could work. More than likely, though, Versailles is just one of those shows that you DVR at catch when the kids aren’t home or are sleeping.

What do you think of this way to distract the kiddies? Let us know in the comments below.