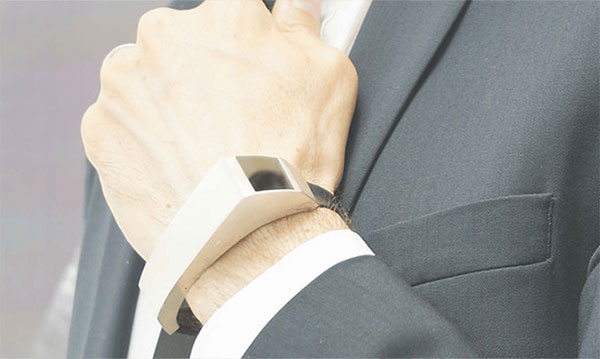 While moms-to-be get to experience all the kicks, twists and movements their unborn child does in the womb, their partners only get to feel those movements through a touch of the belly.

Now, however, your partner can feel your unborn child kick and move like you do, thanks to Fibo, the brainchild of Danish three jewelry design students, who created a start-up called First Bond Wearables. This new wearable technology allows dads to feel baby’s movements on his wrist.

Yes, the wrist of all places. We’ll get back to this in a minute.

“We wanted to get the fathers more involved in the pregnancy since they sometimes tend to get a little left out when the mother is going through all the changes with her body and feeling a little life growing in her belly,” Fibo head of research and media, Sandra Pétursdóttir, told The Huffington Post.

Why the wrist? When asked, that’s where partners wanted to feel the movements, the Huffington Post reported. And, “That way the device would also be visible which, to many fathers was a big plus because they wanted the whole world to see they were expecting a baby,” Pétursdóttir told the Huffington Post.

Here’s how it works: Mom-to-be wears a monitoring device on her belly during the third trimester, and the monitor collects and sends the data to the bracelet, which contains four small beads to mimic baby’s movement. So, partners can feel those twists and turns in real time.

“The baby’s movements data is saved and transferred into a piece of jewelry the family can wear and enjoy after the baby is born,” Pétursdóttir also told the Huffington Post. “So you might say the baby designed the piece of jewelry before it was even born.”

In a way, I find this product to be really cool. Just like Meredith Bland over at ScaryMommy says, “we’re sure there are some situations – like with a surrogate, for example – when this could be a genuinely lovely experience.”

On the flip side, though, as a woman who is currently in my third trimester, the last thing I want to do is wear a monitoring device on my growing belly at all times so my husband can feel our son move. I guarantee after data from a few kicks and twists is sent to his wrist, my husband would remove that bracelet and that would be the end of it.

What do you think of this bracelet? Would your partner wear it? Tell us in comments.