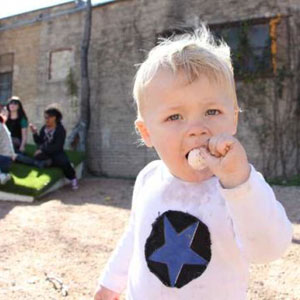 When it comes to lollipops, common kid faves are cherry, grape, watermelon and, uh, breast milk. Yep, you read that right! Breast milk-flavored lollipops just might be the next big treat – thanks to Lollyphile, an Austin, Texas-based lollipop company.

The flavor, which was released on Monday, reportedly tastes like breast milk, but it's actually made from sugar, corn syrup and other natural flavors. They're vegan to boot, the candy maker notes.

Lollyphile says it perfected the flavor by using the milk of four breastfeeding mothers. "We are endlessly grateful to all the mothers who kept sharing their breast milk with our flavor specialists until we were able to candify it," the Lollyphile website notes.

Why make a breast milk-flavored sucker, you ask? On the company's website, Jason Darling, owner of Lollyphile, says that a many of his friends started having babies – and "what slowly dawned on me was that my friends were actually producing milk so delicious it could turn a screaming, furious child into a docile, contented one."

So, Darling said, "I knew I had to capture that flavor."

The lollipops have drawn mixed reviews in the blogosphere. "Breast milk-flavored anything just sounds disgusting," says Jami VB, commenter on blog The Stir. Others, like headly67 on Huffington Post, wondered, "Who would give a nursing baby a lollipop?"

Granted, newborns may not exactly be the target market for these treats (after all, this company also produces absinthe and bourbon flavors). And there are those who are snapping up the suckers – or at least the concept.

"I don't see the problem with it," mom commenter NoWay says on The Stir. "Breast milk tastes nothing like cow's milk. It is much sweeter, and I can see why babies like it. I know, because I breastfed my kids and I was curious – so I tasted it."

Here are tips from the nation’s leading scholars on race, democracy and inequality.
Read more
Travel