'Andi Mack' tells the story of a 13-year-old girl who learns her older sister is actually her mother and that her best guy friend has a crush on her crush. Will your kids watch the new show? 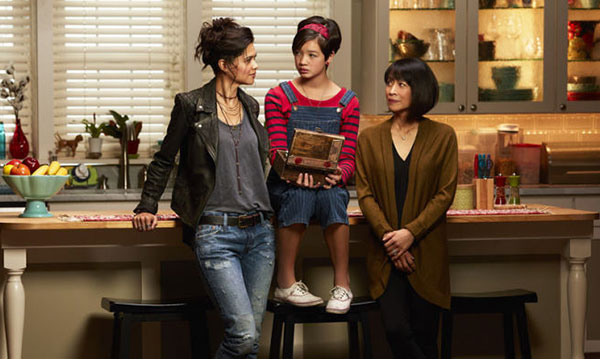 The Disney Channel’s new show Andi Mack is is proving to be different from other shows in the network’s past. Andi Mack, which premiered on April 7, is the first Disney show to feature a majority Asian-American family while addressing the reality of teenage pregnancy and LGBT identity.

The titular character, Andi Mack, is a quirky preteen who’s just trying to figure herself out. However, on her 13th birthday, she gets hit with a mind-boggling plot twist that only seems to make growing up all the more complicated.

When her older sister Bex returns home to spend more time with their family, Andi is overjoyed. Bex is bold, daring, tons of fun, and as it turns out, she’s actually Andi’s biological mother.

Check out the trailer below:

Terri Minsky, the showrunner who also brought audiences Lizzie McGuire in 2003, told Seventeen.com she knew the channel wanted something that hadn’t been done before, but she didn’t think the channel would actually go for this idea “in like a million years.”

The Disney Channel is known for shows about dogs with blogs, undercover spies, and teenagers who double as rockstars, but Andi Mack‘s premise is a sharp veer away from today’s regular children’s line-up.

Andi doesn’t have superpowers or a crazy alter ego. She’s just a kid with a family and friends who love her, facing extraordinary circumstances that they must all learn to navigate together.

And the show strays even further away from Disney’s teeny bopper image with the first ever gay coming-out story line, when key character, Andi’s best friend, Cyrus, turns out to have a crush on Jonah, the same guy Andi has a crush on.

So far, Andi Mack has been rated the networks number one show for kids 6-14. It has also received praise for the way it approaches mature subject matter, the authenticity by which it addresses difficult realities, and the importance of figuring out how to talk to kids about things that feel chaotic, like for instance, living through their mistakes.

A commenter on Deadline Hollywood says, “I like Disney is actually tackling real world issues. There are a lot of teenage pregnancies and some of these kids need to see stories like this to know that it DOES exist. The magic fairyland that people want to keep their kids enclosed in doesn’t really help anyone.”

On the other hand, opponents have argued Disney Channel, whose demographics are primarily kids 6-11, is entering territory their viewers aren’t quite ready for.

TVLine commenter learninglife203 says, “Yeah, my kids won’t be watching this. This is not something for younger kids but maybe for the teen crowd.”

However, despite the wariness of parents who may be concerned about their kids thinking about pregnancy too soon, the Centers for Disease Control and Prevention says one of the most effective ways to prevent teen pregnancies is with dialogue.

Young people who are able to engage in open conversations with their parents about the questions they have about sex are better equipped to make informed decisions.

Interestingly enough, four years after MTV started running 16 and Pregnant, teen pregnancy rates hit a record low in the United States. When the National Bureau of Economic Research investigated the phenomena, they found the rate of teenage pregnancies even declined faster in places where MTV programming was more popular.

“After crunching the numbers, they concluded that the shows prevented more than 20,000 births to teen mothers in 2010 alone,” Time reported.

The aforementioned statistics indicate addressing difficult topics like sex and its consequences, in an authentic, empathetic and open manner, is far more effective than ignoring reality altogether.

Ultimately, Andi Mack presents the story of a family that is not at all typical to primetime.

Its cast is lead by Asian Americans, which shakes up television screens, in which only 52 out of nearly 800 actors (only 6.6 percent) were of Asian descent in 2015. Plus, it shows a family structure that’s complicated and confusing, something that exists, but isn’t always recognized.

Promoted as a shake up to the channel’s line-up, Andi Mack presents the opportunity to tell a different kind of story by relaying real, messy experiences with a cast of diverse backgrounds – which, evidence indicates, may just be what audiences need to see.

Are you planning to let your kids watch this show? Tell us in comments.